By the turn of the century, African Americans did find sports success in some disciplines. But in the sport of wrestling, another 80 years would pass before a black athlete stood atop the podium in Seoul with the gleaming gold medal around his neck. It wasn’t until 1949 that a black athlete is known to have wrestled in the NCAA championships.

The Gold Standard exhibit presents the history of the 47 wrestling Olympic champions from the United States who have won 50 gold medals from 1904 to 2008. This full color digital booklet features narrative from the Olympic Games, an honor roll of Olympic wrestling champions with links to their biographies and live footage of Olympic Champions competing.

You can purchase the printed version here. London is the first city to host a Summer Olympiad on three occasions – in addition to 2012, Britain’s capital also hosted the 1948 and 1908 Olympic Games. The wrestling team that represented the United States in 1948 included a remarkable eight Hall of Fame Distinguished Members. Cliff Keen of Michigan was the team manager and Art Griffith of Oklahoma State was the head coach. Among the squad of 16 wrestlers were six Hall of Fame members. A trio of Iowa Teachers (now Northern Iowa) competitors, Gerry Leeman, Bill Koll, and Bill Nelson, qualified for the team. Nelson was injured just prior to the event and was unable to compete.  Henry Wittenberg, Glen Brand, and Dick Hutton also represented the U.S. Wittenberg and Brand won gold medals and were the first Americans to do so since 1936. 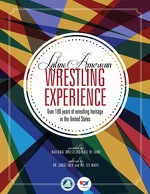 The presence of Latino wrestlers in the United States dates back to the first decade of the 20th century with 1908 Olympian Frank Narganez. Latinos represented in this book and its accompanying exhibit are people who trace their ancestry to Mexico, Puerto Rico, Cuba and other Spanish speaking cultures of Central and South America. You will find in these stories that for more than a century, Latino wrestlers have leveraged participation in this sport to not only gain access to an education but also to merge those character traits and values derived from their culture and from wrestling to forge success in all walks of life, thus underpinning our message that “America Needs Wrestling!”