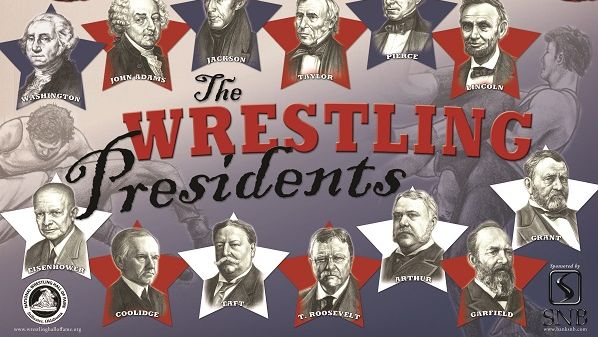 Perhaps the early finishing school for scufflers was the Rev. James Maury's Academy at Fredericksburg, Virginia, an institution which turned young gentry into scholars and, as in the case of young George Washington, into able wrestlers as well. At 18, the big, shy Washington apparently held a ''collar and elbow'' wrestling championship that was at least county-wide and possibly colony-wide. Washington never lost his touch. At the age of 47, ten years before he became the first President of the United States, the Commander of the Continental Armies still had enough left to defeat seven consecutive challengers from the Massachusetts Volunteers.

The ''collar and elbow'' style devised its name from the starting position. Standing face-to-face, each wrestler placed one hand behind his opponent's neck and the other behind his elbow. While doing away with such tactics as bull-like rushes, the position opened up many possible skill maneuvers.

It was at this time that Lincoln had his celebrated bout with Jack Armstrong, the local tough and county wrestling champion. Lincoln was keeping the store at New Salem, Illinois, when his boss backed him to out-wrestle the feared Armstrong. From the start, Lincoln proceeded to hand out a thrashing to the local champion. Frustrated by Lincoln's enormous reach, Armstrong started fouling his opponent. Lincoln stood it for a while, but eventually lost his temper. Picking up his opponent, the storekeeper dashed him to the ground and knocked him out. Armstrong recovered in time to keep his cronies from starting a free-for-all.

Often forsaking the ''common British'' style of collar and elbow for the free-for-all style of the frontier, Lincoln undoubtedly was the roughest and toughest of the wrestling Presidents. Also known as ''catch-as-catch-can,'' this style was more hand-to-hand combat than sport.

Lincoln progressed rapidly between the ages of 19, when he defended his stepbrother's river barge from Natchez thugs, throwing the potential highjackers overboard, and 29, when he cautiously mentioned himself as possibly the second best wrestler in southern Illinois. Lincoln certainly did not achieve any national fame as a wrestler, but his career was typical of the way the sport was conducted in the first half of the 19th Century.

William Howard Taft, the heaviest wrestling President at his ''best weight'' of 225, was a lifelong follower of collar and elbow. Big Bill was intramural heavyweight champion at Yale, and was a fourth generation wrestler in the Taft family. He was the 27th President.

Perhaps the most enthusiastic of the wrestling Presidents was Taft's immediate predecessor, Theodore Roosevelt, who continued regular wrestling workouts throughout his term as Governor of New York. Roosevelt, of course, had an affinity for most kinds of strong physical exertion. The 30th President, Calvin Coolidge, was rated ''tolerable good'' as a wrestler by his father, old Colonel John, until at around 14, Cal took to ''duding around and daydreaming about being a big-city lawyer.''