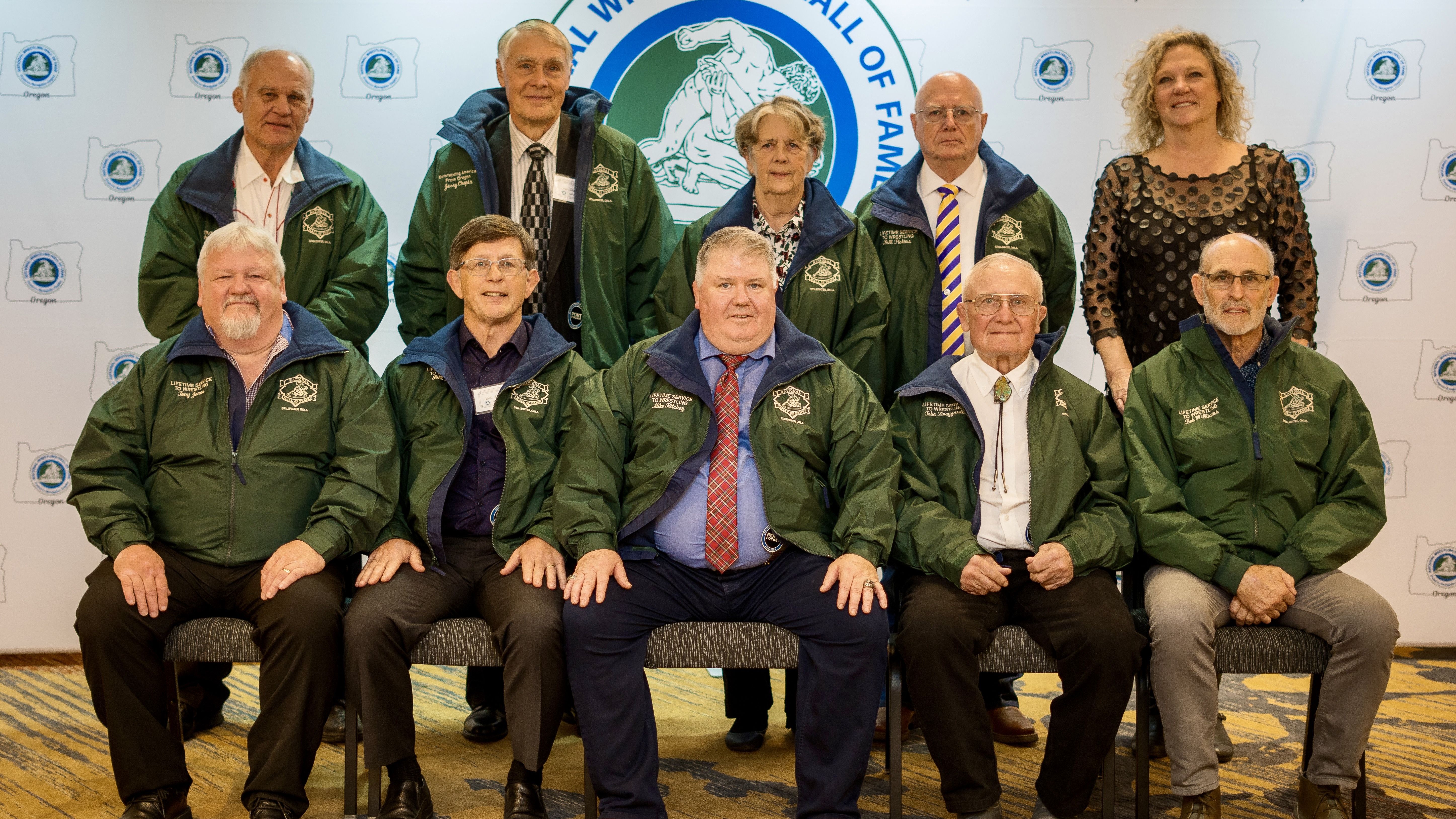 Congratulations to the Class of 2022 of the Oregon Chapter of the National Wrestling Hall of Fame!!!

These outstanding individuals were inducted on October 22, 2022 for their “Lifetime Service to Wrestling.”

Tobe Zweygardt graduated from Oregon State University (OSU) in 1962. His wrestling history includes a Kansas High School State Championship in 1952 and college Pacific Coast Championships in 1961 & 1962.  He was also the USA Greco Roman World Team alternate in 1962. As an official of 10 years, Tobe was selected to referee the NCAA Division 1 National Championships 3 times. Tobe has an impressive coaching history that started in 1962 in South Africa, continuing to the Ivory Coast and Senegal in West Africa until 1964. He then began his Oregon coaching in 1965,  including a head coach job from 1978-1982 in Prairie City, Oregon. Tobe is one of 7 founders of the OSU Wrestling fundraising organization. He continues to serve to meet the ongoing needs of the program. He currently is on multiple community boards for Prairie City, Oregon. His wife is Janet and he has 2 children Lance and Chantelle. https://youtu.be/FUbYZB0MBrE

Tony Jones has been involved in the state wrestling leadership and in coaching wrestling in Oregon non-stop since 1980 where he started as an assistant coach at Central HS.  He has coached at Thurston HS, Springfield HS as head coach, Marshfield HS, and was head coach at Southwestern Oregon Community College from 1997-2001. He has led Oregon wrestling teams on cultural exchanges to Japan, China, New Zealand, Bulgaria, New Dehli-India, and Moscow-Russia. He was the state commissioner for the Oregon Wrestling Association from 1999-2010 and continues today as the OWA Treasurer and Membership Director.  He officiated at OSAA wrestling events and OWA events beginning in 1986 until at least 2010. He was named the 1992 USA Wrestling Developmental Coach of the Year.   Tony is married to Michelle. He is the Director of Alternative Education & Career Technical Education at Winter Lakes High School in the Coquille School District. https://youtu.be/FL1E_l-Zp_A

Bill Pickens is credited with starting the wrestling program in Baker School District in 1972. Coach Pickens was head coach at the Middle School from 1972-1980 and again from 2002-2004. He served as assistant coach at Baker HS from 1980-1986 and head coach at Baker HS in 1986, 88-89 and 1990-2001. After retiring, Coach Pickens moved to Prineville in 2004, where he volunteered for 3 seasons in the Crook County High School wrestling program. Bill has devoted a total of 31 years to the wrestling community involved in either coaching or another capacity, being instrumental in the success of numerous District Champions and State placers.Pickens joins Baker's first head wrestling coach (1976), Chuck Holliday, as an honoree.  Bill graduated from Marshall HS in Portland in 1965, earned a BS at Oregon State in 1969 and a Masters Degree at U of O in 1975. https://youtu.be/s0XKGtX-bFE

Charles Robert “Bob” Williams attended the University of Oregon, lettering in wrestling and graduating in 1953. He coached at South Eugene High School from1956 to 1979. He then transitioned to Sheldon High School where he coached from 1981 to 1987. Finally he landed at Pleasant Hill High School where he coached wrestling from 1990 to 1997. He was the Cultural Exchange coach to Bulgaria in 1996. He passed away in October of 1997.  His family  includes children Robert, Brett, Blayne, Alicia, Allena, Jason, Leif and  his wife Shelly Williams Green.  Coach Williams coached wrestling in the state of Oregon for 43 years. Coach Williams coached numerous state champions as well as 3 national Greco Roman champions. seven of his wrestlers competed at the Division 1 level: Bruce Glenn, Randy Robinson, Rick Rexius, Brett Williams, Bob Williams Jr., Hank Hosfield and Leif Williams.  All but one of those wrestlers were from South Eugene HS. https://youtu.be/9hYLqClIBqI

Rex Stratton began wrestling in 1968-69 for David Douglas HS. His service to wrestling began as he started officiating in 1986 and that continued until 2021 when he passed away. He was the Portland Officials Wrestling Association commissioner for over a decade. He also coached wrestling for Roosevelt HS for a while and Estacada MS from 2019 thru 2021. Rex had the heart for wrestling, the wrestlers knew he would work with them and their skills. He would always tell the wrestlers "not every wrestling move works for every wrestler but, every wrestler has a move that works for them". As a wrestling official Rex was fair and compassionate, always had time for the wrestler & parents to answer their questions. As the POWA Commissioner Rex worked with the officials to improve their officiating and assigned them according to their skills.  He is survived by his wife Launa and 3 children, Buzz, Kendall and Demarie. https://youtu.be/aPFoLAv82X4

Bill Nugent, in addition to his high school triple crown championship at Marist HS in Oregon, is a 4 time NCAA qualifier for the University of Oregon, the Outstanding Wrestler in the 1982 Pac 10 Championships and a NCAA D1 All-American in 1982. In 1984 he was the Olympic Freestyle Alternate and was voted Outstanding Wrestler of the 1984 National Freestyle Open Championships. He earned a silver medal in the 1985  World Cup. His coaching tenure began at colleges. He first coached at Univ of Oregon in 1983, then Univ of Montana, then Southern Oregon University. He began coaching high school at Canby in 1989, then Tigard in 1990, from 1992-1998 he was the head coach at Tualatin HS, and from 1998-2006 he was the head coach at Oregon City HS. Coach Nugent is a retired high school teacher and now lives in Canby, OR with his wife Jennifer. He has 3 children: Sophie Nugent 21, Emma Moreno 27, Kate Nugent 24. https://youtu.be/mDoXfOL4XS4

Mike Ritchey was a 4 time NAIA All-American at Southern Oregon State College (now known as Southern Oregon Univ) from 1985-1988.  He was the Team Captain in 1987 & 1988. He was also a 2tTime NAIA Cultural Exchange Team member in 1985 to Greece and Yugoslavia and in1986 Oregon Team to South Africa. From 1988-1994 he was an assistant coach at SOU and then stepped into the head coach position in 1995 where he led the Raiders as head coach until 2020. His tenure included a 2001 NAIA National Team Championship, five time NAIA runner ups, and a 2009 NWCA Dual Meet Championship. He guided SOU to 23 consecutive seasons of winning dual records. Coach Ritchey finished with an overall record of 235 wins and 107 losses. He coached 136 NAIA All-Americans at SOU and coached his wrestlers to 22 NAIA individual national championships. He was a 9 time NAIA Regional Coach of the Year and 3 time NAIA Wrestling Coach of the Year (2001, 2009 & 2013). https://youtu.be/2tjyAdxAYHg

Jerry Chapin had a 36-year civil service career with the U.S. Army followed by 9 years in the defense industry.  Upon graduation from Oregon State University in 1968, Jerry began his service for the U.S. Army as a GS-7 and advanced to GS-15, the highest GS ranking.  In 1987 he was promoted to Senior Executive Service, the equivalent to a military general officer rank, where he served until retirement from Army Civil Service in 2004. Jerry worked on development of major defense projects including UH-1 Helicopter Missile Countermeasure Systems; UH-60 Blackhawk Helicopter requirements and turbine engine selection; Bradley Fighting Vehicle development and testing; and M1 Abrams Tank development. He wrestled at North Salem HS in Oregon and varsity at Oregon State University from 1965-1968 where he was a PAC 8 champion and D1 qualifier. He is married to Kay Parker Chapin, has 4 children & 12 grandchildren. https://youtu.be/yQG3julgYUU