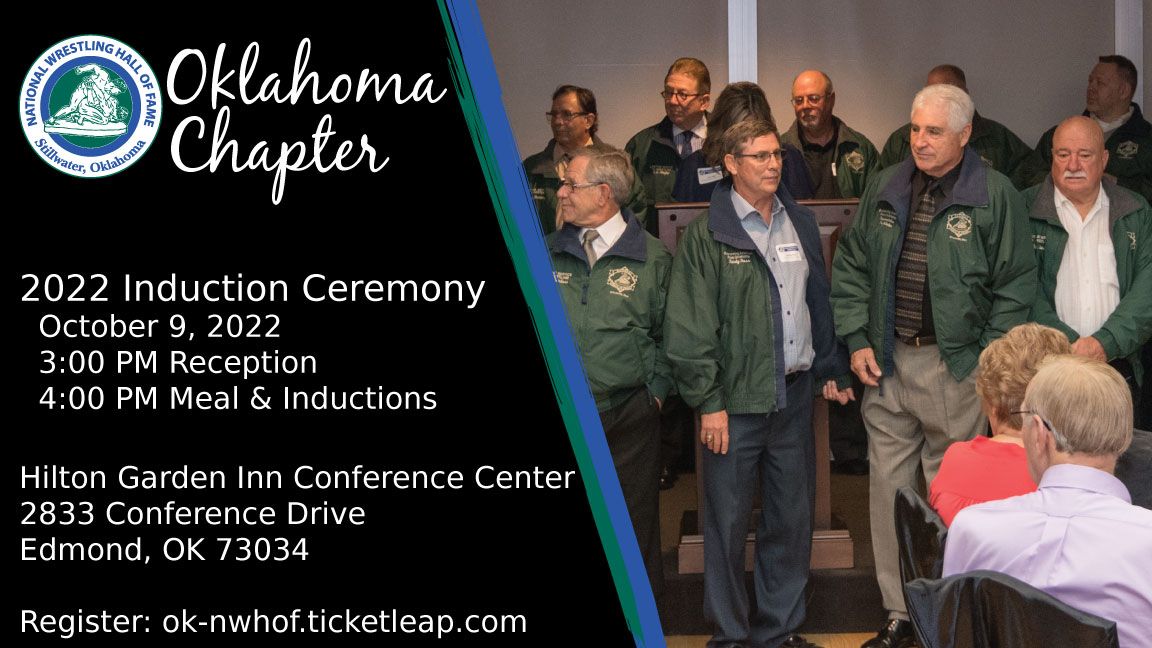 STILLWATER, Okla. — Four outstanding high school wrestling coaches, a pioneering volunteer coach, a longtime official and a well-known veterinarian make up the Class of 2022 to be honored by the Oklahoma Chapter of the National Wrestling Hall of Fame at its induction ceremonies in October.

In addition to these traditional awards sanctioned by the National Wrestling Hall of Fame, the Oklahoma Chapter has added a new state award to be given to a family that has had great success in wrestling and brought credit to the sport in the state.

“We have so many great wrestling families in Oklahoma that we feel it’s important to recognize their successes and contributions to the growth of our sport,” said Oklahoma Chapter President Steve Ferguson. “This first year, we are giving it to the family considered by many in our state to be the first family of wrestling, the Smith brothers of Del City, Lee Roy, John, Pat and Mark. We are naming the award in their parents’ honor, the Madalene and Lee Roy Smith Family Wrestling Award.“

The 2022 inductees will be honored on Oct. 9 at the Hilton Garden Inn, 2833 Conference Drive in Edmond. A reception begins at 3 p.m., followed by a banquet at 4 p.m. and the induction ceremony at 5 p.m. Tickets are $70 per person and can be purchased at OK-NWHOF.ticketleap.com or by contacting Howard Seay at c4dcowboys@aol.com or 918-639-8868.

The Lifetime Service to Wrestling award is presented to coaches, officials and contributors who have devoted a minimum of 20 years of service to wrestling. The Outstanding American award is presented to individuals who have used the disciplines of wrestling to launch notable careers in other walks of life such as science and technology, business and industry, and the arts and humanities.

The Oklahoma Chapter’s new Madalene and Lee Roy Smith Family Award is given to a family with two or more members who have achieved significant success in wrestling in the state.

Mike Henry—Lifetime Service to Wrestling—After winning over 100 matches as a collegiate wrestler for Portland State University, Mike Henry turned his attention to coaching, spending a season in Los Alamitos, California before coming to Oklahoma. He coached a season at Jay and a couple of seasons in Clinton before settling in Shawnee in 1981 and finding his coaching home. He spent six years at Shawnee Junior High, compiling a dual meet record of 151-21-2. His roster consistently numbered over 90 athletes who were all able to compete across the state on A, B and C teams. In 1987, he moved to Shawnee High School where he quickly led his team to the 1988 state tournament title. The next year, his wrestlers won the state dual meet championship. He was the 1988 4A Coach of the Year, the 1989 All-State coach and the 1992 OWDA Coach of the Year.

Gordon Nelson—Lifetime Service to Wrestling—Gordon Nelson coached six years at McAlester High School, leading some of that school’s most successful teams from 1979-85. He moved to Carl Albert High School as an assistant coach from 1986-1990. But he has made his biggest mark as an official beginning in 1977. Consistently chosen to officiate the state tournament, Nelson is known as an official who controls the mat, but also mentors and guides other officials to be the best they can be. He was chosen to referee the All-State match in 1994 and is a member of the Central Oklahoma Officials Association.

Bill Reeves—Lifetime Service to Wrestling—Bill Reeves started his coaching career as the head coach for Calumet Junior and Senior High Schools from 1972-1981. In 1982, he moved to El Reno where he coached from 1982-1995, briefly coming back in 2013-14. Over his years in El Reno, he coached 11 state champions, 52 state placers, four high school All-Americans, eight Oklahoma All-State wrestlers, nine district championship teams and two state runner-up teams. He was honored as District Wrestling Coach of the Year and as an All-State wrestling coach.

Mike Sheets—Outstanding American—As a freshman in college, Mike Sheets wrestled two weights above his natural weight class and earned All-America honors, starting a collegiate career that stands among the greatest ever in the Oklahoma State University record books. He won two national titles for the Cowboys and was a four-time All-American competing at 167 pounds. After finishing his undergraduate education, Sheets turned his attention to his lifelong goal of becoming a veterinarian, but he hadn’t quite gotten wrestling out of his system. He was able to pause his veterinary studies long enough to wrestle in the 1988 Olympic Trials where he finished second and became an alternate. After the Olympics, he returned to the OSU vet school and the rest is history. Today, Dr. Sheets is highly regarded as one of the best veterinarians in eastern Oklahoma and Northwest Arkansas, using the work ethic he learned as a wrestler to care for animals of all sizes.

Steve Shibley—Lifetime Service to Wrestling—After graduating from Northeastern State University, Steve Shibley began his coaching career in 1972 at Sequoyah Junior High in Broken Arrow. In 1974, he moved to Sapulpa High School where he coached for 12 years. He then moved to Sand Springs’ Charles Page High School and coached there until 1989. Over his career, Shibley coached 32 state placers, six state champions and 10 All-State wrestlers. He was selected to coach the All-State team in 1983. After stepping down from coaching, Shibley continued to serve the sport as the athletic director for Sapulpa Public Schools from 1989-2000.

LeRoy Smith—Lifetime Service to Wrestling—LeRoy Smith has been involved with the sport of wrestling for over 60 years, including starting programs from scratch in Bixby, Bethesda Boy’s Home in Mounds and in Glenpool. He began his wrestling career in 1943 at Tulsa’s Cleveland Junior High. Although he couldn’t wrestle in high school, the love for the sport stayed with him. When his son started wrestling, he helped Jerry Forsythe and Onions Martin at the Blue T Club. In 1963, he was asked to teach moves to Bixby’s new team. At the same time, he earned his officials license and refereed for over 20 years. He was instrumental in convincing the Glenpool School District to start a wrestling program in 1976. Although the high school program was dropped a short time later, the elementary program survived and in 1983, the junior high and high school programs were re-started. Smith helped with the program until his retirement in 2020. He was the first inductee into Glenpool’s Athletic Hall of Fame in 2010.

Ray Weis—Lifetime Service to Wrestling—Ray Weis spent 25 years as a head wrestling coach, at Snyder High School in 1995-96, Okmulgee High School from 1996-2000 and at Jenks High School from 2000-2020. Over his career, he coached 11 individual state champions, 48 state placers and 23 All-State wrestlers. His teams won district championships in 2016 and 2019 and his career dual meet record was 131-126. He coached two three-time state champions, Justin DeAngelis and Michael Arias. Weis was honored as the 2019 COOA Wrestling Coach of the Year, the 2020 Region 7 Coach of the Year and as one of the 2020 All-State coaches. He served on the All-State selection committee eight times.