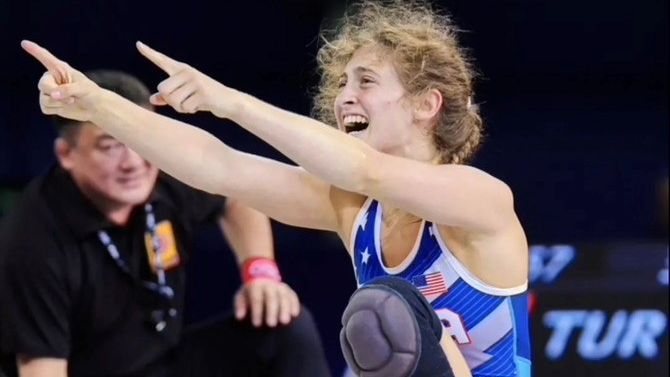 The Robert Feldmeier and Richard “Pete” Hausrath Most Outstanding Wrestling Award in Division I and Division II respectively went to Kole Mulhauser and Carter Baer this year. Kole will be attending Princeton next year and Carter will be wrestling at University of Binghamton. After reviewing their wrestling background one thread that is common for the both of them is that they train at Rickey Martin’s Grain House Wrestling Club in Watertown, NY. Carter and Kole were coached and trained there by former Ohio State All-American Kenny Courts and Grain House coach Chad Snow. Martin has a beautiful sports complex in Watertown and provides excellent coaching and facilities for young wrestlers of both genders. The two Zoeys, Zoey Griffith and Zoey Jewett two upcoming girls’ wrestlers, also take advantage of the work out facilities. Rickey and Chad and the help of others built the 12,000 square feet complex in 2016 and have made teaching wrestling and the life lessons that accompany wrestling their main focus. We salute their dedication and passion for the sport.

The Steve Silver Award for the Outstanding Female Wrestler in New York will be given to this year’s National Tricia Saunders Award winner Sofia Macaluso. Section IX wrestling website manager and former Stanbro Media Award winner, Mike Carey, described Sofia journey to a Silver Medal at this year’s world championships in the U20 tournament in Sofia, Bulgaria.  “Macaluso’s journey to the silver medal was nothing short of epic! In the round of 16 Sofia pinned 2021 Junior World bronze medalist Sito Sito from India in 5:52, then stuck Junior World silver medalist Aurora Russo from Italy in 2:10 in the quarters! In the semis Macaluso locked horns with 2021 Junior World 5th Melda Dernecki from Turkey. Sofia left no doubt – she was leading 12-3 before recording her third consecutive pin of the tournament, this one at the 2:36 mark, and punched her ticket to the finals. In the gold medal match, Macaluso would leave it all on the mat but would fall a little short losing 6-1 to 2019 Cadet World gold medalist Ruka Natami from Japan. Sofia still has a year left of U20 eligibility left and will look to take home the gold next year at the World Championships in Warsaw, Poland.” Additionally, her father Heath was coaching in her corner throughout the whole tournament. Heath has played a major role in her development.