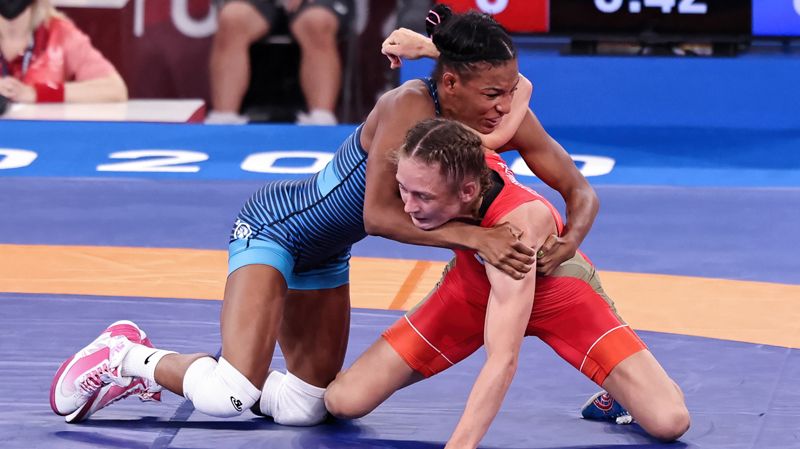 By Gary Abbott
USA Wrestling
This weekend, at the Senior World Team Trials in Lincoln, Nebraska, there will be competition in six weight classes for a spot on the 2021 U.S. Senior World Team in women’s freestyle, which will compete in Oslo, Norway, October 2-10.

All four Tokyo Olympic medalists in women’s freestyle have accepted their spot on the World Team, as permitted by the World Team Trials qualifying procedures. Olympic champion Tamyra Mensah Stock (68 kg), Olympic silver medalist Adeline Gray (76 kg) and Olympic bronze medalists Sarah Hildebrandt (50 kg) and Helen Maroulis (57 kg) will all be wrestling in Oslo. These four weight classes will not be contested in Lincoln.

With that said, the other six weight classes are jammed with past World and Olympic Team members, age-group World medalists and national champions at many levels. Regardless of who wins these weight classes, the U.S. women’s team for Oslo will be very talented.

We will go through each weight class in more depth.

This is the largest weight class in Lincoln, and had so much depth that the seeding committee decided to go 10-athletes deep in the pre-seeds. The athletes in this weight class come from 53 kg (where the U.S. did not medal in Tokyo) as well as from 50 kg. Getting the No. 1 seed is Ronna Heaton, a U.S. Olympic Team Trials runner-up and past Cadet World champion. Dom Parrish, who was third in the U.S. Olympic Team Trials, a past Senior National champion and who has competed on three U.S. age-group World Teams, comes in at No. 2. Two-time World bronze medalist Alyssa Lampe is seeded No. 4, with past U.S. Senior Nationals champion and two-time age-group World Team member Alex Hedrick at No. 4.

There are over 20 entries expected, so the rest of the field has a ton of experience on the Senior, college or age-group levels. Among the notable athletes not in the seeds is Sage Mortimer, who qualified for the Olympic Trials last year while still in high school, past University Nationals and WCWA national champion Samantha Klingel and NAIA national champion Nina Pham. Also competing are Arelys Valles, Estrella Dorado Marin, Natalie Reyna-Rodriguez, Peyton Prussin, Torieonna Buchanan and Vanessa Ramirez.

This weight class is headlined by 2019 World champion and Tokyo Olympian Jacarra Winchester, who placed fifth at the Olympic Games down at 53 kg. By reaching a medal match in Tokyo, Winchester moves directly to the semifinals of the World Team Trials based upon the qualifying rules. She chose to go up to 55 kg, which is the weight class where she won her World title.

Gaining the No. 1 seed is Jenna Burkert, who was second in the U.S. Olympic Team Trials at 57 kg and is moving down. Burkert has made multiple Senior World Teams. Cheyenne Sisenstein, an NCWWC national champion in college and also a current U23 World Team member, comes in at No. 2. Amanda Martinez, who was second in the 2021 NCWWC Nationals and a U23 Nationals runner-up is No. 3. Melanie Mendoza, who won the Last Chance Olympic Trials Qualifier, is No. 4, and Marissa Gallegos, a runner-up to Sisenstein at the NCWWC Nationals, received the No. 5 seed.

This weight class has a unique mix of wrestlers who tried out for the Olympics at either 57 kg or 62 kg. The top seed is Junior World champion and multiple National Team member Maya Nelson, who placed third at the U.S. Olympic Team Trials up at 62 kg. The No. 2 seed is Michaela Beck, who is the 2021 U23 World Team member at 59 kg and a past Junior World Team member. Cameron Guerin, an NCWWC college national champion last year, competed in the U.S. Olympic Team Trials at 57 kg.

Brenda Reyna, also a NCWWC national champion and second in the U23 Nationals, gets the No. 4 seed. Young star Xochitl Mota-Pettis, a 2020 Senior Nationals runner-up at 57 kg, continues to improve at the highest level. Megan Black, a past U23 World Team member and many-time Senior Nationals placewinner, secured the No. 6 seed.
https://nwhof.org/hall_of_fame/bio/3993
A number of emerging talents are throwing their hats in the ring at this weight class. College All-American Phoenix Dubose will compete, as will incoming college star Claire DiCugno and current high school talent Esther Han. Others in the draw are Briana Kellin and Tateum Park.

This weight class has considerable talent, led by Tokyo Olympian Kayla Miracle, who has the No. 1 seed. Miracle did not compete for a medal in Tokyo, and will have to reclaim her weight class at the World Team Trials in order to compete in Oslo. A 2019 Pan American Games champion and 2019 Senior World Team member, Miracle will have some big-time challengers in Lincoln.

Ana Luciano, a 2021 NCWWC college national runner-up, as well as a U23 Nationals runner-up, secured the No. 5 seed. 2021 NAIA national champion, and 2020 U23 Nationals champion Desiree Zavala received the No. 6 seed. The rest of the field will include college competitors who met the requirements to enter, including Zoe Nowicki, Sierra Brown Ton and Andrea Schlabach.

Earning the top seed is popular Forrest Molinari, who twice placed fifth in the Senior World Championships and has won three Senior National titles. Molinari moved up to 68 kg for the U.S. Olympic Team Trials, where she placed third. Emma Bruntil, a two-time NCWWC college national champion and member of the 2021 U.S. U23 World Team, received the No. 2 seed. Veteran talent Julia Salata, a 2018 Senior Nationals champion who placed second behind Molinari in the 2018 Final X, gets the No. 3 seed. College star Ashlynn Ortega, a 2021 NCWWC runner-up and 2021 U23 World Team member, was given the No. 4 seed.

The top two seeds at 72 kg blasted onto the Senior scene in April, as 17-year old high school juniors who reached the finals at the U.S. Olympic Team Trials. Kennedy Blades reached the Olympic Trials finals at 68 kg, while Kylie Welker was a U.S. Olympic Team Trials finalist at 76 kg. Both made big news this summer, winning Junior World titles at different weight classes, with Blades at 72 kg and Welker at 76 kg. These two did meet within the last year, with Blades beating Welker in the 68 kg finals of the Last Chance Olympic Trials Qualifier.

The field will be very strong, as the seeding committee selected seven pre-seeds. No. 3 goes to Yelena Makoyed, who was a 2021 NCWWC college national champion, and placed second in the World Team Trials at both the U23 and UWW Junior levels. Dymond Guilford, the 2021 Senior Nationals champion at 76 kg and 2018 Junior World Team member, gets the nod at No. 4. Alyvia Fiske, a 2019 Senior Nationals champion and 2021 U23 World Team member, is in at No. 5. Nahiela Magee, who has been placing at the Senior Nationals going all the way back to 2016, is the No. 6 seed. 2018 Final X runner-up and five-time age-group World Team member Rachel Watters has been given No. 7 seed. Others in the draw are Aury Naylor, Lillian Restrepo and Marlynne Deede.

The competition will be broadcast live by FloWrestling.