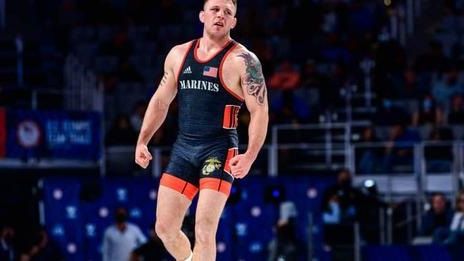 By Mike Willis
USA Wrestling
Two medalists from the Rio Olympics will once again contend for the podium in Tokyo. Ukraine’s Zhan Beleniuk and Germany’s Denis Kudla will both be favorites to bring home medals in a loaded 87 kg weight class.

Kudla will enter the tournament unseeded. He took bronze at the 2016 Olympics and is a two-time Senior World medalist, taking bronze in 2019 and silver in 2017. Kudla and Beleniuk wrestled in the bronze medal match at the 2021 European Championships in April with Beleniuk earning a 1-1 win on criteria.

The No. 3 seed is the other 2019 World bronze medalist Rustam Assakalov of Uzbekistan. Assakalov is a 2016 Olympian, a two-time Asian Games finalist, taking gold in 2014 and finishing with silver in 2018. He also won silver at the 2015 World Championships.

Daniel Gregorich Hechevarria of Cuba earned the No. 4 seed. He claimed his Olympic berth with a runner-up finish at the Pan Am Olympic Qualifier. In 2018 and 2019, Gregorich Hechvarria competed in both the U23 and Senior World Championships. He finished with bronze and silver at U23 Worlds and did not medal at Senior Worlds. He is a 2019 Pan Am Games bronze medalist and a 2018 Central American and Caribbean Games champion.

Belarus’s Nikolai Stadup also finished fifth at the 2019 World Championships. However, Kiril Maskevich was selected to be the Olympic representative. Maskevich won the Individual World Cup in December and followed it up with a silver medal at the European Championships, where he knocked off Viktor Lorincz in the opening round by technical fall, 9-0.

The only man to defeat Maskevich at the European Championships was Serbia’s Zurabi Datunashvili, who bested him in the gold medal match, 2-1. During the tournament Datunashvili also knocked off Zhan Beleniuk and Denis Kudla in consecutive matches. The following month, Datubashvili punched his ticket to the Olympics by making the finals of the Last Chance Olympic Qualifier. This is Datunashvili’s third Olympic Games. He is a two-time World Championships fifth-place finisher (2014, 2017) and a three-time European Championships gold medalist (2016, 2017, 2021).

The other wrestler to earn their birth through the World Olympic Qualifier was Croatia’s Ivan Huklek. He is a two-time Senior World Team member and a 2017 U23 World silver medalist. He also placed fifth at the 2019 European Games.

Lasha Gobadze of Georgia claimed the other Olympic berth from the European Qualifier. Gobadze was the 2019 World champion at 82 kg, a non-Olympic weight class. He is also a 2015 World bronze medalist and a 2017 U23 World silver medalist.