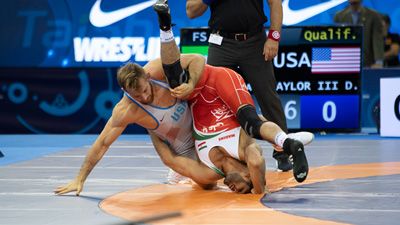 By Taylor Miller
USA Wrestling
This weight class features a highly anticipated potential rematch between the two favored athletes at the weight, Hassan Yazdanicharati of Iran and David Taylor, who was the national winner of the Hall of Fame's Dave Schultz High School Excellence Award in 2009, of the United States.

No. 1 seed Yazdanicharati is a returning Olympic champion, winning gold at 74 kg at the 2016 Rio Games. In 2017, he bumped up to 86 kg, where he has remained throughout the quad, claiming World titles in 2017 and 2019. The one person who kept Yazdani from the crown in 2018 was Taylor. The two met up in the first round of the World Championships with the American emerging victorious with a decisive 11-6 win.

Taylor went on to win gold in his first and only World Championships appearance and was named UWW’s Men’s Freestyle Wrestler of the Year. In 2019, Taylor suffered a season-ending injury, which ultimately kept him out of the 2019 Worlds. Taylor’s comeback began in 2020 when he earned gold at the Pan American Olympic Qualifier to qualify the USA for the Tokyo Games. Taylor enters the Games unseeded, so we could see a matchup with Yazdani at any time.

The field features four athletes, who have earned a Senior World medal at 86 kg, including three from the 2019 World Championships.

2019 runner-up Deepak Punia has put together an already-impressive career at just 22 years old with Cadet and Junior World gold medals in addition to his Senior World silver. He’ll head to his first Olympic Games as the No. 2 seed.

Both 2019 bronze winners, Artur Naifonov of Russia and Stefan Reichmuth of Switzerland are expected to compete. Naifonov, who will be the No. 3 seed, is also a 2017 Junior World champion and 2018 U23 World silver medalist. Reichmuth’s 2019 medal performance earned Switzerland its first Olympic wrestling bid since 2012 and first men’s freestyle spot since 2008.

The other past 86 kg medalist is Boris Makoev, who represents Slovakia. Originally from Russia, Makoev has competed at the last three World Championships for Slovakia, with his best finish coming at the 2017 Worlds, where he collected silver. Makoev qualified for the Games with a runner-up finish at the World Olympic Qualifier in May.

Qualifiers Ali Shabanov of Belarus and Sohsuke Takatani of Japan have earned World medals weight classes other than 86 kg. Shabanov’s most recent medal was bronze at 79 kg from the 2018 World Championships. He also recorded bronze medals at 74 kg in 2013 and 2017 as well as at 70 kg in 2014. Sohsuke, who has competed at four different weight classes this quad, is a 2014 World silver medalist at 74 kg.

Holding the No. 4 seed is American-born Myles Amine, who will be the first Olympic wrestling representative for San Marino, a small country in Europe. Amine finished fifth at the 2019 World Championships to earn the Olympic bid for San Marino. A multiple-time All-American for the University of Michigan, Amine produced podium finishes at the European Championships, including silver in 2020 and bronze in 2021.

The 86 kg men’s freestyle competition will take place Aug. 4-5. Fans can watch all the action on the Olympic Channel and follow along on USA Wrestling’s social media channels @USAWrestling.