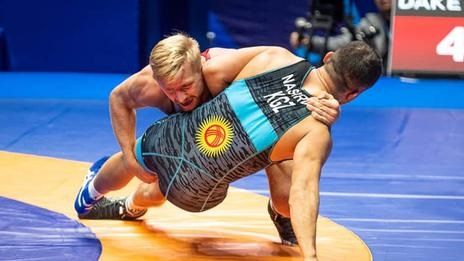 By Taylor Miller
USA Wrestling
The 74 kg bracket is loaded with talent, including a new face to weight class, two-time World champion at 79 kg Kyle Dake, who looks to disrupt the stronghold of Zaurbek Sidakov from Russia, who is the two-time reigning World champion at the weight.

USA’s Dake has already made waves this year, besting 2012 Olympic champion and four-time World champion Jordan Burroughs in a best-of-three finals series at the U.S. Olympic Team Trials in April. Burroughs had been the U.S. representative at 74 kg for every World Championships and Olympic Games since 2011. In addition to his two World titles at 79 kg, Dake is a 2021 Pan American champion and owns Ranking Series gold medals from the 2018 Yasar Dogu and 2020 Matteo Pellicone.

In order to take the throne, Dake, who is unseeded, will likely have to go through either Sidakov or two-time World champion in different weight classes Frank Chamizo of Italy. Dake has a win over Chamizo at a special event card put on by FloWrestling in 2020.

Sidakov, who was the 2019 European Games champion, will hold the No. 3 seed in Japan. In addition to his World titles, he boasts two gold medals and two silver medals from the prestigious Ivan Yarygin Grand Prix. His most recent event was the 2021 City of Sassari Tournament in June, where he won gold.

Entering Tokyo as the No. 1 seed, Chamizo won World titles in 2015 at 65 kg and 2017 at 70 kg. In 2018, Chamizo began competing at 74 kg. At the Worlds that year, he took fifth, but managed a podium finish at the 2019 World Championships with a silver-medal performance. In the 2019 finals, Chamizo fell to Sidakov, 5-2. Next month, he’ll wrestle in his second Olympic Games, winning bronze at the 2016 Games in Rio de Janeiro.

Alongside Dake, Sidakov and Chamizo, there are six other World medalists in the mix including No. 2 seed and 2019 World bronze winner Daniyar Kaisanov of Kazakhstan as well as No. 4 seed and 2016 World bronze medalist at 70 kg Mostafa Hosseinkhani from Iran. Since his medal performance in his home country, Kaisanov has produce four medal finishes at major international events, including a gold at the 2021 Asian Championships. Hosseinkhani most recently earned a gold medal at the 2021 Poland Open.

Multiple-time World medalists Jeandry Garzon Caballero of Cuba and Bekzod Abdurakhmanov of Uzbekistan are in the hunt.

Garzon has four World medals, including one silver and three bronzes, with his most recent being a bronze from the 2010 World Championships which was his last World appearance until 2019. He also tallied a fifth-place finish at the 2008 Beijing Olympics. Abdurakhmanov, who trains at the Nittany Lion Wrestling Club, won bronze at 74 kg in 2018 and a bronze in 2014 at 70 kg. Like Garzon, he enters his second Olympic Games and placed fifth at the 2016 Rio Olympics.

Abdurakhmanov’s NLWC teammate and 2011 World silver medalist Franklin Gomez of Puerto Rico is also expected to compete in Tokyo. This will mark his third Olympic Games. He was ninth at the Rio Games and 15th at the London Games. Gomez is the first wrestler from his country to qualify for three Olympics.

Avtandil Kentchadze of Georgia looks to bounce back from his 2019 Worlds performance, where he finished 33rd. We know he is a podium threat because in 2018, he collected a Senior World silver medal as well as a U23 World gold medal.
Others in the field include 2019 World fifth-place finishers Keisuke Otoguro of Japan and Kamil Rybicki of Poland, 2021 European Olympic Qualifier runner-up Khadzhimurad Gadzhiyevof Azerbaijan, 2021 African/Oceania Olympic Qualifier champion and runner-up Amr Reda Ramadan Hussein of Egypt and Augusto Midana of Guinea-Bissau, and 2021 World Olympic Games Qualifier champion and runner-up Magomedkhabib Kadimagomedov of Belarus and Vasyl Mykhailov of Ukraine.

The competition at 74 kg will take place Aug. 5-6 in Tokyo. Fans can keep up with all the action on the Olympic Channel as well as USA Wrestling’s social media platforms @USAWrestling.