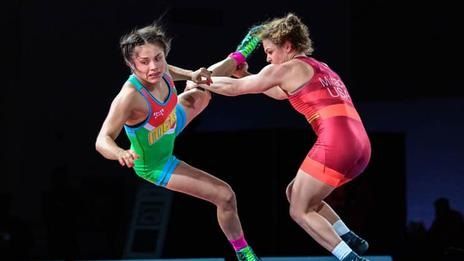 By Gary Abbott
USA Wrestling
The No. 1 seed and 2019 World champion is Aisuluu Tynbekova of Kyrgyzstan, a veteran who has wrestled her best in recent years. She won the 2019 World title by beating a 2018 World champion in the finals, Taybe Yusein of Bulgaria. This will be Tynbekova’s third Olympic Games, placing fifth at the 2016 Rio Games and 13th at the 2012 London Games. Tynbekova also boasts a 2017 World bronze medal, and has competed in seven Senior Worlds. She won all three international events she entered in 2021, including the Asian Championships and major tournaments in Poland and Ukraine.

In addition to her 2018 World title, Yusein has won five more Senior World medals. Included are three World silver medals (2012, 2013, 2019), as well as two bronze medals (2012, 2013). She fell short of the medals at the 2016 Olympic Games. She also was a Junior World champion. A two-time European champion, she placed only ninth at the 2021 Euros, but won gold at her most recent tournament, the Yasar Dogu in Turke

The third seed goes to another talented star, 2018 World silver medalist and 2019 World bronze medalist Yukako Kawai of Japan. In 2018, she also won the U23 World Championships. Her most recent international event was back in 2020, a gold at the Asian Championships. She is the younger sister of 2016 Olympic champion Risako Kawai.

The No. 4 seed goes to a U.S. star, multiple age-group World medalist Kayla Miracle, who competed in her first Senior Worlds in 2019 but did not earn a medal. Miracle has been winning World medals since her teen years, claiming a Cadet World silver in 2012, two bronze medals from the Junior Worlds in 2014 and 2016 and a silver medal at the 2019 U23 Worlds. Miracle was a four-time WCWA college national champion competing at Campbellsville University. Miracle has been strong in continental events, winning the 2021 Pan American Championships and the 2019 Pan American Games. Her seed is a testament to her consistency at major Senior competitions.

There are another Senior World champions in the mix in Tokyo, 2013 World champion Marianna Sastin of Hungary. Sastin has three other World medals in her trophy case, with 2005 and 2011 World silvers and a 2009 World bronze. This will be her fourth Olympic Games appearance, and is seeking her first Olympic medal. While she may have had some better results earlier in her career, Sastin has won three international medals in 2021, including a silver at the European Championships.

Marwa Amri of Tunisia made history at the 2016 Olympic Games, winning an Olympic bronze medal at 58 kg, the first African woman to win an Olympic wrestling medal. She followed that up with a 2017 World silver medal, losing in the finals to Olympic champion Helen Maroulis of the USA. She has been in the game for a long time, evidenced by her 11 African championships titles.

Two-time World bronze medalist Henna Johansson of Sweden is another top contender, claiming a bronze at the 2019 and 2013 World Championships. She was a 2009 Junior World champion. This will be her third Olympic Games, after placing 10th in both the 2012 and 2016 Olympics.

Two-time World bronze medalist Anastasija Grigorjeva of Latvia is another veteran talent, heading into her third Olympic Games. She has won the Senior European title three times, and has been a two-time runner-up there. Another past World medalist is Liubov Ovcharova of Russia, who won a 2019 World silver medal competing at 59 kg. Ovcharova punched her ticket for Tokyo by winning the World Olympic Games qualifier in Bulgaria this year.

Ukraine brings a younger star to the Games in Iryna Koliadenko, a 2019 World silver medalist at 65 kg. She won the 2021 European Qualification Tournament to earn her Olympic berth, then followed up with a Senior European title. She has won a pair of U23 World bronze medals, as well as a Junior World bronze medal.

Lais Nunes de Oliveira of Brazil was the 2020 Pan American Olympic Qualifier champion, and will be going to her second Olympic Games. Never a World medalist, she was fifth in the 2018 Senior Worlds in her only medal opportunity. She boasts a pair of Pan American Championships titles.

Two-time Cadet World champion Sonam of India beat 2016 Olympic bronze medalist Sakshi Malik to earn her spot on the Indian team, then placed second in the Asian Olympic Qualifier to earn her spot in the Olympic Games.

Kriszta Incze of Romania, a 2019 European Games bronze medalist, earned her Olympic berth based upon her ninth-place finish at the 2019 Worlds, when North Korea pulled out of the Olympics and she had the highest placement among those who had not qualified yet.

Jia Long of China, who puncher her ticket with an Asian Olympic Qualifier title, does not have a ton of Senior level experience. Two-time Commonwealth champion Aminat Adeniyi of Nigeria earned her berth with a runner-up finish at the Asian/Oceania Olympic Qualifier. Bolortuya Khurelkhuu of Mongolia won a silver medal at the World Olympic Games Qualifier, and also added a silver medal at the 2021 Asian Championships.