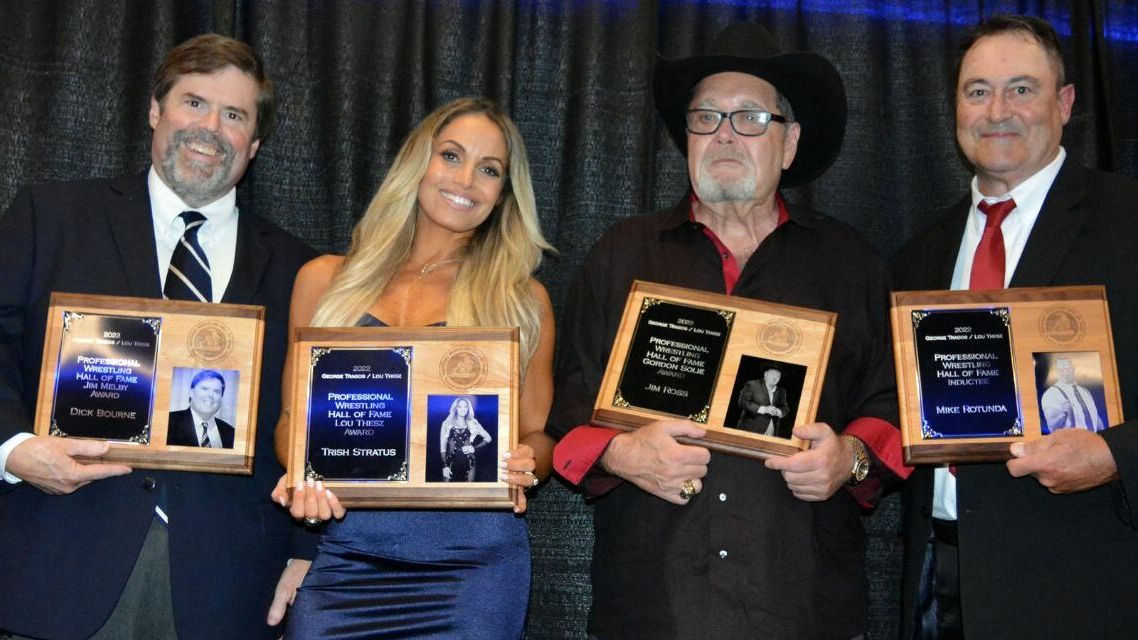 By Joyce Paustian
Slam Wrestling
WATERLOO, Iowa – The 2022 George Tragos/Lou Thesz Professional Wrestling Hall of Fame induction weekend in Waterloo, Iowa, was the ideal place to be for dedicated wrestling fans. As usual, the weekend provided a wide variety of activities and opportunities to interact with wrestling greats, both old and new. Many attendees have often said that there is such a different and positive “feel” to this particular HOF weekend.

Thursday night’s events began casually at the Dan Gable Museum. The Jason Sanderson-hosted social offered a great chance for fans to both reconnect over pizza and soft drinks, against the backdrop of the museum. As would be appropriate, the museum was decked out in old school professional glory, with many additional vintage wrestling artifacts and silent auction items set out for fans to enjoy and bid on. The annual Impact Award winner was announced, in the form of the Minnesota High Rollers tag team of Sterling Nolan and the late Jerry Anderson. Fans will remember that Jerry received a standing ovation at last year’s banquet event, attending just days after chemotherapy treatment during a long battle with cancer. While Jerry passed away in September 2021, his courage, along with both of their positive impact on the independent wrestling scene, will live on.

A trivia event back at the Best Western host hotel capped the night, and was well supported by dozens of teams. It was a fun and friendly competition to show off the knowledge of fans on a wide variety of wrestling topics.

Friday events at the museum included some interesting podcast round table discussions. Five well-established wrestling podcast teams gave their pitch to fans on how they got their start of their podcast journey. Old school gamers had their chance to try out the latest version of the Filsinger Legends card game, plus attend a live podcast presentation by Art of Wrestling podcaster/wrestler Colt Cabana.