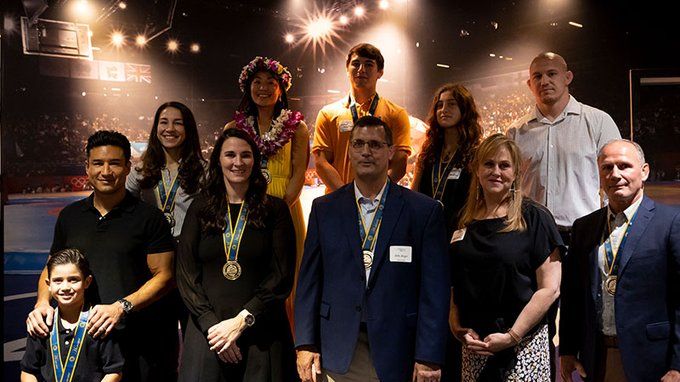 Each year, the National Wrestling Hall of Fame Honors Weekend begins with the Friday night unveiling of the plaques. A wrestling life etched in stone. A social hour is held, uniting the wrestling family for a time of celebration with each inductee getting their first look at their Hall of Fame awards and displays.

This is the first time since 2019 the unveiling has a large crowd. In 2020, the induction was postponed until 2021 because of COVID-19. In 2021, only a limited number of family and friends of the inductees were permitted due to pandemic restrictions.

It’s a relaxed time with family and friends celebrating great careers in wrestling. Plenty of photos and video are taken for memories.

The timing was a bit different because it was held a bit earlier than normal, in between sessions of Final X Stillwater, USA Wrestling’s exciting Senior World Team qualifier held next door at Gallagher-Iba Arena. It was truly a great day for the sport of wrestling.

“We thank USA Wrestling for bringing Final X here and giving these folks a great treat to see not only the past and recognize those past that we’re about to recognize but we get to go over and watch the future that will be in the Hall of Fame before we know it,” said Lee Roy Smith, executive director of the National Wrestling Hall of Fame.

The inductees, along with family and friends, were recognized by emcee Sandy Stevens, standing next to their awards and their memorabilia display case in the Hall of Fame facility.

It is truly and exceptional class of wrestling honorees. This is the first class with two female Distinguished Members, and the third and fourth women ever inducted.

Clarissa Chun, the new Iowa women’s wrestling coach, has had great success as an athlete and coach. Chun won the World Championship in 2008 and earned a bronze medal at the 2012 London Olympics. She is a four-time U.S. Open champion and became the first Hawaiian wrestler to qualify for the Olympics. She also served many years as Assistant National Women’s Coach for USA Wrestling.

Sara McMann joins Chun in Olympic greatness. McMann became the first American woman to earn a silver medal in wrestling, when she made history at the 2004 Athens Olympics. She is also a three-time World medalist.

Andy Rein and Jake Warner are the men’s Distinguished Members. Rein collected a silver medal at the 1984 Los Angeles Olympics. Varner is a 2012 Olympic gold medalist. Both had great college careers, Rein at Wisconsin and Varner at Iowa State.

Melissa Simmons embodies resilience and wrestling excellence. She is this year’s Medal of Courage recipient. Simmons suffered a fractured eye socket and retina damage in a car accident when she was 18. Later that year, she returned to the mat at Oklahoma City University with a self-made protective face mask. Currently, she works as director of operations for the University of Oklahoma women’s gymnastics team.

Mike Moyer is this year’s recipient of the Order of Merit, awarded for service to the sport. Moyer has been the executive director of the National Wrestling Coaches Association since 1999. Throughout his leadership, the organization has established 260 new collegiate wrestling programs, including more than 90 women’s teams, in the past decade.

The late Tom Clark is this year’s Meritorious Official. Clark, who died in 2017, officiated for 35 years. He worked several Olympics and dozens of World Championships.

The Outstanding American, Mario Lopez, is perhaps best known for his role in “Saved by the Bell” and other acting accomplishments. A former wrestler at Chula Vista High School in California, Lopez is also a New York Times Best-Selling author and two-time Emmy Award winner. Inspired by childhood idols John Smith and Dan Gable, Lopez said wrestling taught him discipline and consistency while working to achieve goals. Those values guided him through and life in television.