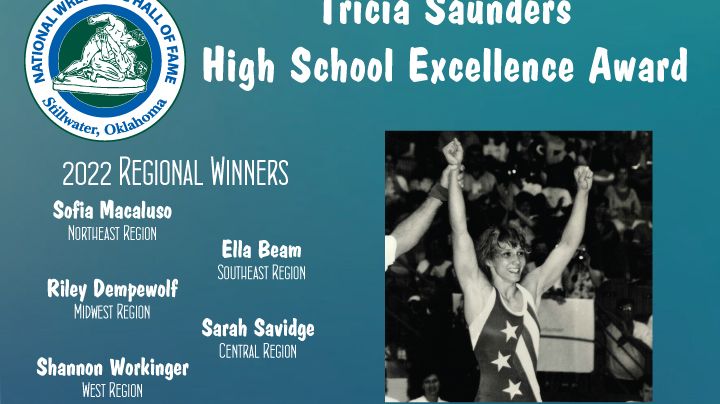 The National Wrestling Hall of Fame on Tuesday announced the state and regional winners of the Tricia Saunders High School Excellence Award (TSHSEA).

The award recognizes and celebrates the nation’s most outstanding high school senior female wrestlers for their excellence in wrestling, scholastic achievement, citizenship, and community service.

The state and regional winners of the Dave Schultz High School Excellence Award will be announced on Wednesday. The DSHSEA recognizes and celebrates the nation’s most outstanding high school senior male wrestlers for their excellence in wrestling, scholastic achievement, citizenship, and community service.

“We are excited about honoring this deserving group of young women as recipients of our Tricia Saunders High School Excellence Award,” said Executive Director Lee Roy Smith. “Women’s wrestling in America has experienced tremendous growth in recent years and these honorees exemplify all of the qualities of well-rounded student-athletes. We look forward to seeing what they accomplish in wrestling, academics and life.”

Thirty-six state high school athletic associations have approved girls wrestling as an official sport and 32 held official girls high school state wrestling championships in 2021-22. Hawaii was the first state to host a girls state championship in 1998 while Texas began its girls tournament in 1999. The number grew to six states by 2015 and has exploded in recent years to 36 states.

Women’s wrestling is one of the fastest growing high school sports with participation growing by more than 71 percent from 16,562 in 2018 to 28,447 in 2020. Growth has continued through the pandemic and more than 33,000 female high school wrestlers competed in 2022.

TSHSEA winners are evaluated and selected on the basis of three criteria: success and standout performances and sportsmanship in wrestling; review of GPA and class rank, academic honors and distinctions; and participation in activities that demonstrate commitment to character and community.

Central: Sarah Savidge of Colorado Springs, Colorado, is a four-time place-winner, three-time finalist and Colorado state high school champion for Doherty High School. The daughter of Bryant Savidge and Sherry Greenleaf, she is ranked fourth at 127 pounds in the National Girls High School Rankings for March and had a career prep record of 87-16, including 32-1 as a senior when she won her state title. Savidge is a two-time Junior Folkstyle Nationals champion and a two-time Junior Freestyle Nationals All-American. She won USA Wrestling Colorado’s freestyle state tournament twice and was named Outstanding Wrestler for the USA Wrestling Tour of America in 2021. Savidge was a member of Colorado USA Wrestling’s junior team from 2019-2022 while being named Pikes Peak Regional Wrestler of the Year by the Colorado Springs Gazette and Colorado Springs Student Athlete of the Year in 2022. She was named Most Valuable Wrestler for Doherty High School in 2019, 2020 and 2021 and served as team captain in 2021 and 2022. Savidge volunteered with Habitat for Humanity at the Colorado Springs Homeless Shelter and as a math tutor. She has a GPA of 3.98 at Springs Studio for Academic Excellence and has signed a letter of intent to wrestle for Life University.

Midwest: Riley Dempewolf of Lafayette, Indiana, is a four-time Indiana state high school champion for McCutcheon High School. The daughter of Jason Dempewolf and Carrie Leak, she is ranked third at 200 pounds in the National Girls High School Rankings for March and had a career prep record of 23-1, going undefeated each of her last three years. Dempewolf is a two-time Junior Nationals All-American, finishing sixth in 2019 and second in 2021, and is also a three-time Folkstyle All-American. In 2021, she also won the Recruiting Showcase tournament and was named to the Junior Duals All-Tournament team. Dempewolf was a member of the student council for four years, including being president as a senior, and a member of the Friends of Rachel for three years, currently serving as president. She received the Jefferson Award from McCutcheon Students In Action and the Emerging Scientist Award from SANCAS. A member of National Honor Society and currently serving as vice president, Dempewolf has a GPA of 3.86 while earning Academic All-State honors twice. Dempewolf has signed a letter of intent to wrestle at Indiana Institute of Technology, where she plans to study biomedical engineering with the goal of designing prosthetics for children in sports.

Northeast: Sofia Macaluso of Otisville, New York, is ranked No. 1 at 122 pounds and No. 21 in the pound-for-pound rankings in the National Girls High School Rankings for March. The daughter of Heath and Nikki Macaluso, she wrestled on the boys varsity team for Minisink High School in 2019 and 2022, not competing in 2020 and 2021 because of COVID-19. In 2019, she became the first female to place at the DI Section IX tournament, finishing third, while also capturing the PSAL New York girls high school state title. Macaluso was also the Mohawk Valley Freestyle tournament champion. In 2022, she had a 60-9 record and became the first female to reach the finals at the DI Section IX tournament while also helping Minisink capture the state dual team title, winning three matches by fall. Macaluso was also the Kittatiny and Journeyman champion and a finalist at Suffern. In 2021, she finished fifth at the Junior World Team Trials and sixth at the U23 World Team Trials while reaching the finals at Junior Nationals. In 2019, Macaluso was Junior Nationals Cadet champion, Folkstyle Nationals Cadet and Junior champion and finished fifth at the Junior World Team Trials. She was member of the New York National Freestyle team from 2018 to 2021 and finished eighth at Junior Nationals in 2018. Macaluso interned with New York State Senator Jen Metzger, using her passion for the environment to take on a project to research municipal recycling programs across the 42nd District with the goal of developing a model program that communities could adopt or use to improve existing programs. A black belt instructor at Budo Jiu-Jitsu MMA, she volunteers at Venom Girls Wrestling Club while also donating time at various youth wrestling tournaments. Macaluso was chosen as a member of the 2018 American Kintero World Team, representing the United States in Japan and participating in their wrestling diversion program. She and her teammates competed in the Japan Open, lived with host families, visited schools and learned about Japanese culture. She received a New York State Senate resolution for Student Athletic Achievement in Women’s Wrestling. Macaluso has worked as a counselor at Ninja Camp USA since the eighth grade and also works as a lifeguard during the summer. Her older sister, Mia, was the New York and Northeast Region winner of the TSHSEA in 2020. Sofia was Minisink Valley High School’s Varsity Scholar Athlete in 2022. She has signed a letter of intent to wrestle at East Stroudsburg University.

Southeast: Ella Beam of Lawndale, North Carolina, is a four-time North Carolina high school state champion for Burns High School and was ranked sixth at 180 pounds in the National Girls High School Rankings for March. The daughter of Luke and Kathy Beam, she was 20-0 in her prep career against girls and 85-65 overall, while also lettering in soccer and swimming. Beam was a finalist at Preseason Nationals and Folkstyle Nationals in 2021 and did not place in 2022 due to illness. She earned all-conference honors for boys wrestling while also earning all-conference honors in girls soccer. Beam received the wrestling team’s “Before Self” award in 2019 while sharing team MVP honors in 2020 and being named Outstanding Wrestler in 2021. She earned the swimming team’s “Most Improved” award and was also the recipient of the KTC Broadcasting McDonald’s Athlete Award. Class president as a senior and class marshal as a junior, Beam was a member of Air Force Junior ROTC, Students Leading A Change and FFA while also serving as school mascot and being a member of the marching band. She served as AFJROTC Corp Commander in 2021 and received the AFJROTC AMVETS National award, the National Sojourners award and the Air Force Association National award after being named Cadet of the Year in 2019. Beam volunteered with the Pleasant City Church Kids Ministry, the PCC Next Level Team, on JROTC community service projects, filling bird feeders at nursing homes, and participated in Mission Serve missions stateside and internationally. Beam has a GPA of 4.44 and plans to wrestle for Presbyterian College.

West: Shannon Workinger of Quincy, Washington, is a three-time place-winner, a two-time finalist and a Washington state high school champion for Quincy High School. The daughter of Coby Workinger and Jennifer Gardner, she is ranked sixth at 164 pounds in the National Girls High School Rankings for March. Workinger had a career prep record of 102-10, including 36-0 as a senior and 70-1 her last two seasons, while winning three district championships and placing eighth, second and first. She finished fourth at Junior Nationals in 2021 and won the Preseason Nationals in 2022 while also winning the Trinity Award at the World of Wrestling Rocky Mountain Nationals and being named WOW Season Outstanding Wrestler. Workinger also lettered in track and soccer, earning all-league honors. A member of FFA, she finished first in state in competition horse judging teams and received honors for her study of low-stress cattle handling and ranch roping. Workinger works in her family’s business starting horses and dealing with problem horses. She volunteered as a youth coach for basketball and soccer while heading up the girls youth wrestling program. Workinger also volunteered giving community youth horse riding lessons and working at a food bank while serving on the Cowboy Ministries Student Board. Workinger, who skipped a grade, has a GPA of 3.6 and plans to wrestle at Menlo College.