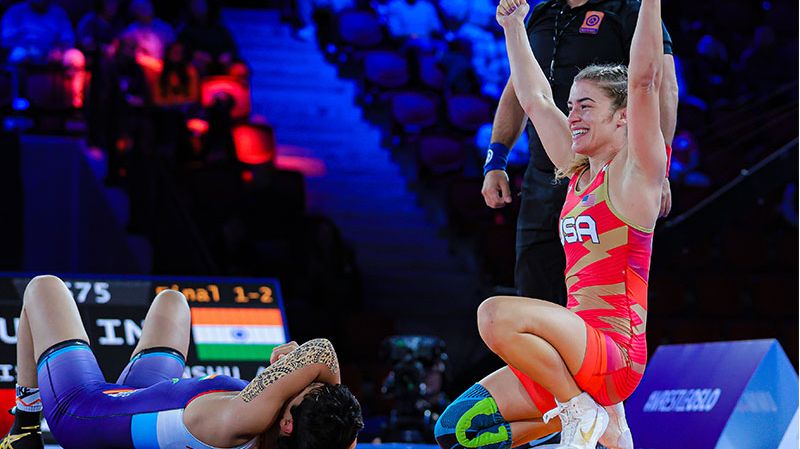 By Gary Abbott
USA Wrestling
OSLO, Norway – The U.S. women’s wrestling program closed out a memorable Senior World Championships with two more medals, including a spectacular performance by the legendary Helen Maroulis to win her third career World title, and a strong second place finish as a team.

Maroulis went into the break trailing a 1-0 match to Anshu on an activity clock point but wasted no time in the second period. After scoring a spin-behind takedown, Maroulis ran an arm bar and put Anshu on her back. Maroulis got Anshu flat with two minutes left on the clock.

2020 Olympic champion and 2019 World champion Tamyra Mensah Stock bounced back after a stunning loss in the 68 kg finals on Wednesday to bring home a bronze medal, with a 10-1 victory over 2017 U23 World bronze medalist Adele Hanzlickova of the Czech Republic.

Hanzlickova got to a leg and forced Mensah Stock out of bounds for the first point of the match for a 1-0 lead, but the Tokyo 2020 champion dominated the rest of the way. In total, Mensah Stock scored five takedowns, mixing sweep singles and counter takedowns for a commanding victory.

Nelson took the early lead, with a step out and a takedown in the first period for a 3-0 lead at the break. Nelson sustained a shoulder injury which may have affected the outcome. Nelson returned to the mat after receiving medical attention, but Baatarjav scored a pair of takedowns and held on late for the 4-3 win.

The USA won a record seven medals in Oslo, matching the most ever won by a U.S. Women’s World Team, which was first achieved by the 2003 World Team which competed in Madison Square Garden in New York City.

Winning gold medals were Maroulis and Adeline Gray at 76 kg, with silver medals from Sarah Hildebrandt at 50 kg and Kayla Miracle at 62 kg, plus bronze medals from Mensah Stock, Jenna Burkert at 55 kg and Forrest Molinari at 65 kg.