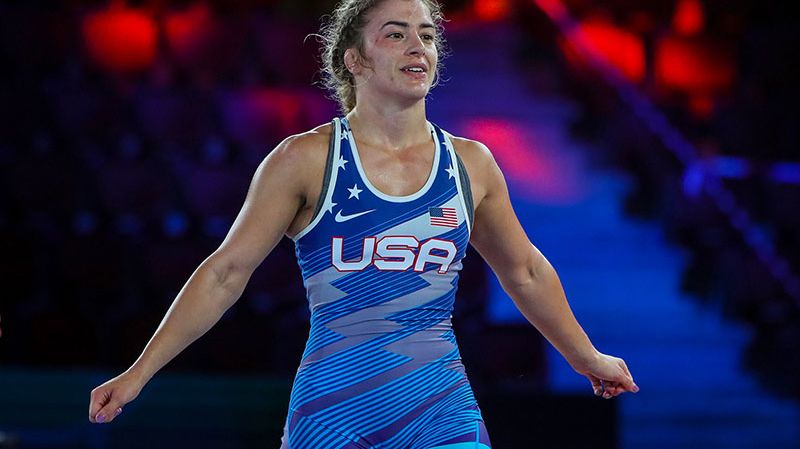 Maroulis To Go For Gold, Nelson and Mensah Stock For Bronze At Women's Worlds

By Gary Abbott
USA Wrestling
OSLO, Norway – 2016 Olympic champion and 2020 Olympic bronze medalist Helen Maroulis showed grit and persistence in winning her semifinals match at 57 kg and earning a spot in the gold-medal match at the Senior World Championships on Wednesday.

Maroulis, who came in as the No. 4 seed at 57 kg, faced a talented young star, 2019 U23 World champion and two-time Junior World champion Sae Nanjo of Japan in the semifinals. After falling behind in the first period, Maroulis emerged with a hard-fought 6-4 victory.

Maroulis was leading a 1-0 match after a shot clock point, but Nanjo was able to score a four-point takedown at the edge of the mat with under a minute to go in the first period to make the score 4-1. Maroulis found momentum going into the break however, scoring a counter takedown to get the match to within a point after three minutes.

Maroulis scored again in the second period and fended off a late takedown attempt from Nanjo with under 20 seconds left in the match to earn the win and the spot in the 57kg finals. Japan’s corner challenged the final sequence of the match, but the call was confirmed to finish Maroulis’ impressive 6-4 win.

In addition to her two Olympic medals, Maroulis has reached the gold-medal finals of the World Championships four times. She was a World champion in both 2015 and 2017 and won a World silver medal in 2012. Maroulis also boasts a World bronze medal.

Her opponent in the gold-medal finals is Anshu of India, who is the first woman from India to reach a Senior World Championships finals. Anshu is a 2021 Asian champion, who placed ninth in the 2020 Olympic Games. Anshu was a 2107 Cadet World champion and has won three other age-group World bronze medals, Cadet bronzes in 2016 and 2018 and a Junior bronze in 2018.

Two U.S. wrestlers were defeated in the semifinals and will compete in bronze-medal matches on Thursday: 2020 Olympic champion and 2019 World champion Tamyra Mensah Stock at 68 kg and 2017 Junior World champion Maya Nelson at 59 kg.

Mensah Stock was shocked in the opening seconds of her bout against Rin Miyaji of Japan. During a scramble after a Mensah Stock shot, Miyaji was able to lock up a cradle and pin Mensah Stock in just 20 seconds.

Miyaji does not have a deep international resume. She won the 2021 All-Japan Invitational and was second in the 2020 Ivan Yarygin Grand Prix.

Nelson competed very well in a heartbreaking 4-1 loss to 2019 Junior World champion Akie Hanai of Japan. The two wrestlers exchanged action early with Hanai scoring the first takedown, but Nelson closed the match to one point after working action to the edge and forcing a caution-and-one call against Hanai. However, a takedown in the second period and strong defense in the final three minutes helped Hanai to a 4-1 win.

Nelson, the No. 4 seed, is competing in her first Senior World Championships. In her bronze medal match, she will face the winner of the repechage bout between Diana Kayumova of Kazakhstan and Shoovdor Baatarjav of Mongolia. Baatarjav was a 2018 and 2019 World bronze medalist. Kayumova was sixth in the 2021 Asian Championships.

2021 Junior World champion Kylie Welker was eliminated from the competition, after the woman who beat her in the first round, Buse Cavusoglu Tosun of Turkey, was defeated in the semifinal round. Only athletes who have lost to a gold-medal finalist are eligible for the repechage.

The medal rounds will be on Thursday, starting at 6:00 p.m. local time. Oslo is six hours ahead of U.S. Eastern time zone. All of the action is live on FloWrestling.