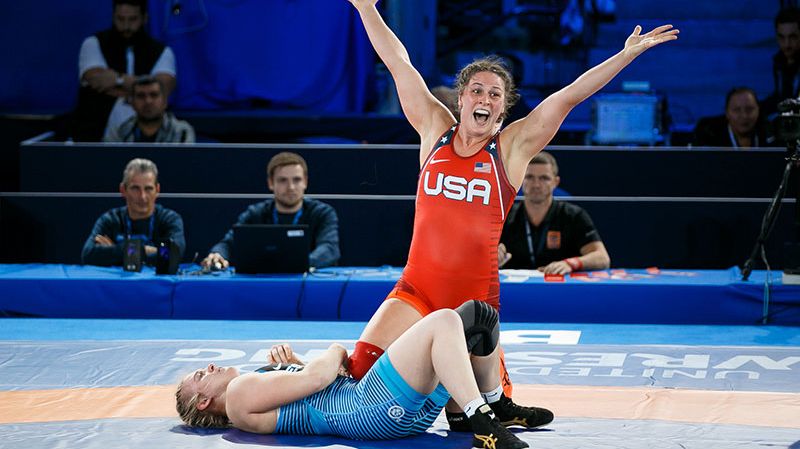 By Gary Abbott
USA Wrestling
OSLO, Norway – The United States won three medals during the Group Two medal session at the Senior World Championships on Wednesday. But one of those medals will be remembered for a long, long time.

History was made in the final match of the night when U.S. superstar Adeline Gray won her U.S. record sixth Senior World gold medal. Coming from behind to take over the match and score a last-second pin over two-time World medalist Epp Maee of Estonia, Gary raised the bar for American wrestling one more time.

Gray’s finals match was full of excitement. Maee controlled the match early and took plenty of momentum into the break, where she was winning 4-0 after an activity clock point against Gray, plus a late-period takedown which the USA challenged and lost.

However, in classic fashion, Gray made a statement in the second period and proved why she is a legend. After powering through a Maee shot attempt and picking up two points on the edge, Gray scored a takedown, transitioned immediately into a trap-arm gut wrench and forced Maee to her back, where she eventually finished up a pin with under two seconds left in the match.

Gray is the first U.S. wrestler of any style or gender to win six Senior World titles in a career. Two nights ago, right here in Oslo, men’s freestyle superstar Jordan Burroughs won his fifth career Senior World title, to tie Gray in the standings. The ink in the record book did not even have a chance to dry before Gray set the record at six.

What excited Gray the most is that she pinned all four of her opponents in this tournament, the first time in her storied career that she got falls in all of her matches at a Senior World Championships.

Gray now has nine total World and Olympic medals. This includes her six Senior World titles, her 2020 Olympic silver medal and two Senior World bronze medals. A native of Denver, Colo., she is one of the greatest athletes produced in the history of the state.

Hildebrandt and Yoshimoto had one of the most exciting finals matches of the tournament featuring plenty of scrambles and key moments. Hildebrandt opened up a 3-0 lead to take momentum early, taking advantage of a shot clock point and a scramble position. However, Yoshimoto wasted no time before hitting the break, scoring a takedown to cut Hildebrandt’s lead to 3-2 after the first three minutes.

In the second period, Yoshimoto forced multiple key positions and capitalized, earning one point on a step out and two points on exposure in a scramble to take the 5-3 lead which held up to the end.

In the third World Championships bronze-medal match of her career, Forrest Molinari won her first Senior World bronze medal with a dominant 12-1 technical fall over Mariya Mamashuk of Belarus.

Molinari defended multiple early Mamshuk double-leg takedown attempts to set the tone for the match, seemingly gaining control of the match with her defense. After the opening exchanges defended by Molinari, she scored two takedowns and then earned two more exposure points to go into the break with a 6-0 lead.

Mamashuk opened the second period with a step out point, but the rest of the way was controlled by Molinari. The American scored two more takedowns and closed out the match with a leg lace, finishing up a 12-1 win and a bronze medal. Molinari won four matches during the tournament.

Molinari was fifth at the 2018 and 2019 World Championships. A WCWA national champion at King University, she now trains with the Sunkist Kids in Arizona. Molinari is a native of California.

The fourth U.S. wrestler in Group Two, Amy Fearnside at 53 kg, lost in her opening match and was not pulled back into repechage. Her final placement in the weight class was 13th.

After the first six weight classes have been completed, Japan leads the team race with 116 points, with the United States in second with 95 points. Third place is way back, with Ukraine with 55 points.

The United States has already won five World medals this year, with Gray’s gold, silvers from Hildebrandt and Kayla Miracle (62 kg) and bronzes from Molinari and Jenna Burkert (55 kg). The USA has a chance to add three more on the final day, with Helen Maroulis in the 57 kg finals, and Maya Nelson (59 kg) and Tamyra Mensah Stock (68 kg) going for bronze.