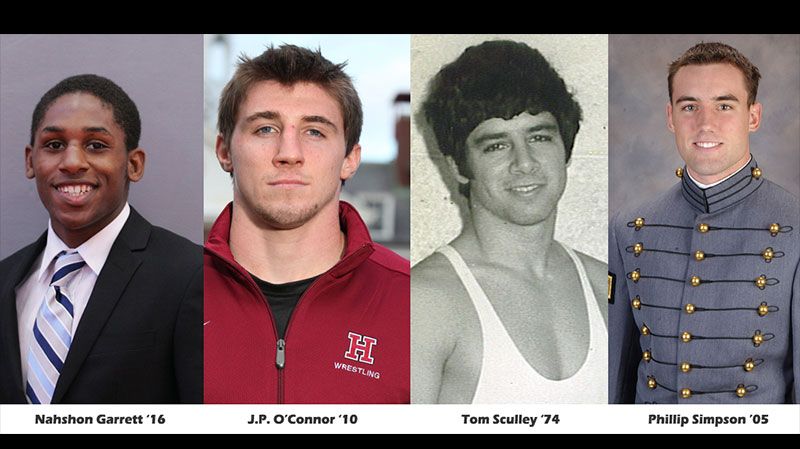 By John Aadland
EIWA
BETHLEHEM, Pennsylvania - The Hall of Fame Committee of the Eastern Intercollegiate Wrestling Association (EIWA), college wrestling's oldest conference, is proud to announce that four new members have been selected for membership into the EIWA Hall of Fame. Members of the Class of 2022 are Nahshon Garrett of Cornell University, J.P. O'Connor of Harvard University, Tom Sculley of Lehigh University and Phillip Simpson of Army West Point. The induction ceremony will take place on Sunday, March 6, 2022 at Cornell University in Ithaca, NY, immediately preceding the finals of the annual EIWA championships.

Nahshon Garrett Is a native of Chico, CA. where he was a two-time California State high school wrestling champion at 103 and 112 pounds in 2010 and 2011.. He was a Senior National Champion at 112 during his senior campaign .

Garrett enrolled at Cornell in the fall of 2012 and immediately found success on the mats. He compiled a 43-5 record as a freshman while winning the EIWA championship and finishing 3rd at the NCAAs where he defeated both the number 1 and 3 seeds at 125 pounds. As a sophomore Garrett won his second EIWA title and was the 2014 NCAA runnerup at 125 pounds. Garrett won his third consecutive EIWA championship in 2015 and was presented with the John Fletcher Trophy for the most career points scored at the tournament. He finished 5th at the Nationals. As a senior Garrett went 37-0 while wrestling up at 133 pounds. He won his fourth EIWA title and was named Outstanding Wrestler of the tournament. At the NCAAs in New York City, Garrett pinned the defending National Champion, Cody Brewer of Oklahoma, in 21 seconds in the semi-finals and then defeated Iowa's Cory Clark 7-6 in the finals. He ended his collegiate career with a 149-12 record, good for second on Cornell's career wins list.

After earning his BS from Cornell in Developmental Sociology, Garrett switched to Freestyle with hopes of making the USA World and Olympic team. He finished 4th in the country in the 2016 Olympic Trials. In 2018 he accomplished what is arguably his most outstanding accolade in the sport as he won Final X and made the World team at 61KG. Unfortunately, he was unable to compete in the World Championships because he tore his pectoral muscle while training.

Garrett comes from a large West Coast family - he has two brothers and four sisters. His twin brother Issac has worked as a professional ballet dancer; his sister, Kandi Bonty, was an All-American in track for Cal Berkeley. Garrett currently works as a wrestling club coach while creating his own instructional videos on BJJ Fanatics, Slick Setups and Fundamental Finishes. He resides with his wife Stefanie Garrett in Kingsport, TN.

A native of Oxford, N.Y., O’Connor was a highly touted recruit out of high school. He won four New York state championships and was a five-time sectional champion. He completed his high school career with a 238-12 record, was named first team All-America, was a member of the Amateur Wrestling News Dream Team and was a recipient of the 2006 Dave Schultz Athletic Excellence Award. In addition, O'Connor was an 8x Freestyle and Greco-Roman Cadet and Junior All-American at Fargo.

During his athletic career at Harvard, O'Connor was a 4x EIWA finalist. As a freshman, O'Connor became Harvard's first ever freshman All-American and is only the second Harvard wrestler to become a three-time NCAA All-American. He placed 5th at 149 pounds as a freshman and sixth as a junior at the NCAAs. As a senior, O'Connor won his first EIWA title, defeating Navy's Bryce Saddoris in the finals, 3-1. At the 2010 NCAA championships in Omaha, O'Connor was the top-seed at 157 pounds. He won his first four matches by the combined scores of 45-6. In the finals, he topped Chase Pami of Cal Poly 6-4 to become Harvard's third NCAA wrestling champion in program history. During his four years of collegiate competition, O'Connor was named EIWA Freshman of the Year in 2007, Ivy League Wrestler of the Year in 2008 and 2010, and EIWA Wrestler of the Year in 2010.

His career record at Harvard was 132-16 which ranked him first in career victories for his alma mater. O'Connor was a two-time team captain, a three-time NWCA All-Academic and Academic All-Ivy honoree, and earned the 2010 William J. Bingham award as Harvard's outstanding male athlete.

After graduating from Harvard with his degree in Human Evolutionary Biology studies, O'Connor stayed involved with the sport as a Harvard assistant wrestling coach from October 2011 to April 2015. In Freestyle competition in 2011 he was a US Open All-American and a World Team Trials Qualifier at 74 KG, O'Connor currently works in London, England in Real Estate Development and Asset Management. He is married to Carly Dickson.

Tom Sculley did not have to leave his hometown of Bethlehem, PA to attend his favored college. Sculley excelled in the classroom and on the mats during his high school career for Bethlehem Catholic, posting a 64-2-1 record en route to winning three individual state championships and one National Catholic championship. He was named his high school's Athlete of the Year in 1970.

Forgoing a redshirt year, Sculley compiled a record of 59-11-3 during his Lehigh wrestling career during which he was a two-time team captain. He placed 5th in the EIWA championships as a sophomore; he then won the conference tournament in both his junior and senior seasons. He qualified for Nationals his junior year, but fell one win short of earning All-American honors. Sculley had a breakout senior season, going 26-0-1. A career highlight was his defeat of defending NCAA champion, Dan Muthler, 9-6, in the Lehigh-Navy dual meet during the 1973-74 season. In the EIWA tournament, Sculley pinned his first three opponents before knocking off Navy's Fred Hahndorf 8-4 in the finals. At the Nationals in Ames, IA, Sculley won all five of his matches, securing the 134 pound title with a 4-3 decision over Jim Miller of Northern Iowa in the championship bout.

Sculley earned his degree in Business and Economics from Lehigh in 1976. For his accomplishments he has been inducted into the Pennsylvania Chapter of the National Wrestling Hall of Fame, the Bethlehem Catholic High School Hall of Fame and the PA State District XI Hall of Fame. Over the years Sculley has stayed close to the sport of wrestling thru his company, Outer Circle Sports which is a licensee of Adidas America and distributes wrestling products throughout North America, and his devotion to the Lehigh University wrestling program.

Sculley lives with his wife Bonnie in Reading, PA and has three grown children.

Simpson enrolled at Army West Point in the fall of 2001 where he immediately set an Academy freshmen record by winning 37 bouts. He was runnerup at 141 pounds in the Easterns. As a sophomore Simpson went 37-3, won the EIWAs with a major decision in the finals and compiled a 6-1 mark at the NCAA Championships, finishing 3rd in the tournament at 141 pounds. Simpson authored a 31-6 record at 157 pounds during his junior season, winning his second EIWA title and second All-American honors at the NCAAs. before putting together his senior year's 29-2 campaign. At the Easterns that season, he edged Cornell's top-seeded Dustin Minotti 8-7 to capture his third EIWA crown. Simpson reached the finals of the 2005 NCAAs in St. Louis where he lost to Zack Esposito of Oklahoma State 5-2 in the 149 pound finals bout. He finished his career at Army West Point with a record of 134-19 and became the school's first-ever three time NCAA All-American. He was awarded the Army Athletic Association Trophy, the highest athletic honor given by the Military Academy.

After graduation Simpson spent eight years as an infantry officer in the US Army. He represented the USA in the 2012 Pan-American Games where he won his weight class in the international Freestyle event. His military roles in the following years included: the Aide de Camp for the United States Forces-Afghanistan Deputy Commander of Support, and serving as a Company Commander.

Simpson currently resides back in his hometown of Nashville, TN where he is Director of Field Operations for a local residential development and construction company. He also operates and serves a coach at the Big Red Wrestling Club.in Nashville. He is married to Tricia (Zuniga) Simpson. They have eight children - four boys and four girls - between the ages of ten and one.