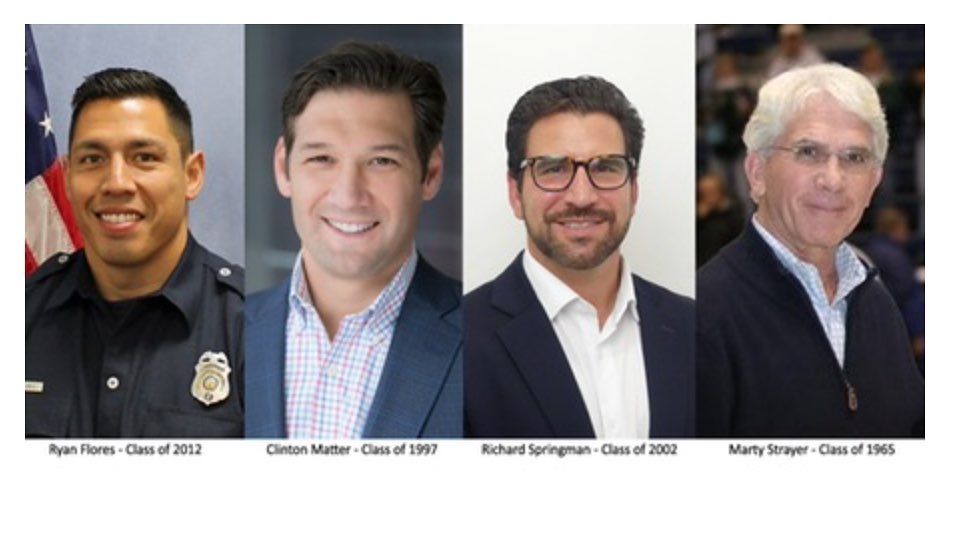 BETHLEHEM, Pa. – The Hall of Fame Committee of the Eastern Intercollegiate Wrestling Association (EIWA), college wrestling's oldest conference, is proud to announce that four new individuals have been selected for membership into the EIWA Hall of Fame. The Class of 2023 inductees are Ryan Flores of Columbia/American University, Clint Matter of the University of Pennsylvania, Rick Springman of the University of Pennsylvania, and Marty Strayer of Penn State University. The induction ceremony will take place on Sunday, March 5, 2023, at The Palestra on the grounds of UPenn in Philadelphia, PA immediately prior to the finals of the annual EIWA Championships.

Newly appointed Committee Chair Natanya Levioff stated: "The Committee has selected four incredible individuals to join the EIWA Hall of Fame. The honorees' athletic careers extend across the decades—from the 1960s to the 2010s—and each faced their own set of challenges that had to be overcome. They were inspirational leaders during their student-athlete days and continue to have impact not just in the sport, but in their communities and in their professional lives. We are honored to include these gentlemen in our Hall of Fame."

Ryan Flores hails from Clovis, California where he was the first 2x State Champion for Floyd B. Buchanan High School in 2006 and 2007. He would captain the team for three years and was 4x All-State/All-Valley/All-Conference. To this day, he still holds the school records for most career wins at 196, most falls in a season at 43, and most career falls at 140.

After high school, Ryan wrestled at Columbia University for two years where he was an EIWA runner-up in 2008 and the champion in 2009; Columbia's first since 1995. He finished that sophomore season with an overall 31-5 record and a perfect 18-0 record in dual meet action. After a one-year hiatus from school, during which time he lived and trained at the U.S. Olympic Training Center in Colorado Springs, Flores transferred to American University and won two more EIWA titles for the Eagles as well as All-American honors in 2011 and 2012, finishing as high as second place.

His senior campaign found him posting a 21-3 record with 17 falls; that in addition to his overall 27 career falls are the second most in AU program history. He would also hold the No. 1 rank in the country for 16 straight weeks, earn the No. 1 seed at the NCAA Championships, and be only the second wrestler in AU history to make the NCAA finals. Flores finished his collegiate career with an overall record of 92-21 with 48 falls, his fastest coming in a time of 24 seconds, and was a 2x Academic All-American. The first member of his family to attend college, Ryan graduated in 2012 with a degree in psychology.

Flores now resides back in his hometown of Clovis with his wife Emily and their daughter. He is a municipal Firefighter-Paramedic who also serves on the HazMat and Arson Investigation teams with pride.

Clinton Matter, from Delran, New Jersey, competed collegiately at the University of Pennsylvania. During his undergraduate career, Clinton was twice elected captain, helped the program capture back-to-back EIWA team titles in 1996 and 1997, and was a 2x NCAA qualifier. He won two EIWA individual titles at 177 pounds and in doing so, he, along with his father Andrew (Penn State) and brother Brett (Penn), have the distinction of being the EIWA's first father/son/son title holders.

Clinton was named an NWCA Academic All-American and the Class of 1915 Award winner as the top male student-athlete in Penn's 1997 graduating class. He earned dual degrees from the Wharton School of Business and the College of Arts and Sciences.

Following graduation, Clinton has remained an active member of the UPenn, Philadelphia, and national wrestling communities. He currently serves as a member of Penn's Grapplers' Club Board, the Vice Chair and founding member of the Pennsylvania Regional Training Center, and the Vice Chair of the University of Pennsylvania's Athletic Board of Advisors. Matter is also deeply passionate about the Beat the Streets collective mission to empower youth through the sport of wrestling. He is a founding board member of Beat the Streets Philadelphia, has served as the Board Chair since BTSP's inception in 2007, and is currently the Board Chair for Beat the Streets National.

Professionally, Clinton has pursued a career in finance, operating in various roles across the global credit markets over the last 25 years. At present, he works as a Senior Investor Associate Fellow at Bridgewater Associates. Clinton and his wife Kourtney (UPenn '98 and captain of the Penn women's swimming team) live in Summit, NJ and are blessed with four children.

Richard Springman attended Norristown Area High School in Montgomery Country, Pennsylvania, where he recorded a 149-15 overall record. Always in pursuit of the pin, his record included 102 true falls, placing him third in state history. He was a 3x State place winner in Pennsylvania AAA States, State Champion in 1997, and a 2x All-American in USA National Freestyle Championships, among others. Off the mat, Springman attained academic success named as a 4x All-State Academic Team, 2x NHSCA Academic All-American, and 1st Team USA Wrestling Academic All-American in 1997.

Springman's combined athletic and academic prowess enabled him to pursue his collegiate career as a highly touted recruit at the University of Pennsylvania. Springman was a 4x EIWA Finalist, only the 16th wrestler in EIWA history with that achievement. He claimed the EIWA crown once while being a 4x NCAA Qualifier, 2x NCAA Semi-Finalist, and 2x NCAA All-American at 174 pounds. He would also earn two of the four EIWAs special championship awards in 2002, the John Fletcher Memorial Trophy and the Bill Sheridan Memorial Award. His undergraduate wrestling accolades also include being a Senior US Open All-American, placing 5th in freestyle, and qualifying for the US Senior World Team Trials where he placed 5th once again in freestyle.

Springman obtained his Bachelor of Science and Engineering (BSE) in Mechanical Engineering and Applied Mechanics (MEAM) from Penn's School of Engineering and Applied Science and would follow in fellow inductee Clinton Matter's footsteps by winning the Class of 1915 Award as the top male student-athlete in Penn's 2002 graduating class. His academic achievements were recognized by the wrestling community by appointment in two separate years to both the Academic All-Ivy and NWCA All-Academic Teams. Soon after his undergraduate degree, Springman returned to the University of Pennsylvania to obtain his MEAM doctoral degree, during which time he was a volunteer coach for Penn's wrestling team and ran his own wrestling clinic to give back to the sport that had given him so much.

Dr. Springman entered the energy sector where he quickly advanced to the position of Senior Vice President of International Projects and Executive Committee Member at Holtec International, responsible for Holtec's international business and five oversees operations centers. He also holds three patents at the company and has contributed to the development and (nuclear) licensing of numerous products. Springman now lives in Media, PA with his wife Laura of 11 years and their three children.

A 1960 graduate of Manheim Central High School in Pennsylvania, the District 3 place winner would go on to make a name for himself that, for over 70 years, has become synonymous with the sport of wrestling in the state.

Marty Strayer would not stray too far from his hometown of Manheim when it came to attending college. He started at Wilkes University where he was the 1961 M.A.C. champion at 157 pounds before making the move to then EIWA school, Penn State. He would bump up a weight to 165 pounds and forge a career record of 43-8-2 while becoming a 3x EIWA finalist, a 2x EIWA Champion, and an NCAA All-American placing 5th for the Nittany Lions in his final year of competition. He was twice named Penn State's Outstanding Wrestler and in 2006, he was named Outstanding Alumnus. Marty graduated in 1965 with a Bachelor of Arts degree in Business Administration.

But the sport wasn't finished with him as Strayer went on to become an official for 15 years, working at the PIAA, EIWA, and NCAA levels. He has been inducted into the District 3, Pennsylvania Wrestling Hall of Fame, the E.I.W.O.A. Hall of Fame, and the Pennsylvania Wrestling Coaches Hall of Fame to name a few. He served on the Board of Directors at the National Wrestling Hall of Fame in Stillwater, OK for 14 years and would then be inducted for Lifetime Service through the Pennsylvania State Chapter. He remains close to the teams who gave him his wrestling career as a longtime supporter of Manheim Central, Wilkes College, and Penn State.

Marty was a successful executive in the computer industry for 30 years and currently resides in Lititz, PA with his wife, Eleanor. They are the business owners of Central Penn Nursing Care located in Lancaster, PA and have two grown children.

About the EIWA Hall of Fame

The EIWA Hall of Fame is the only NCAA Division I Wrestling Hall of Fame in the country. As part of the oldest collegiate wrestling division in the nation, the Committee works tirelessly to induct into its Hall of Fame individuals who have excelled as either competitors or coaches, have contributed to the sport in unparalleled ways, have had impactful lives beyond the mat, and most importantly, embody the traits of character, resilience, and determination. The nomination cycle runs from November 1st through September 15th each year.