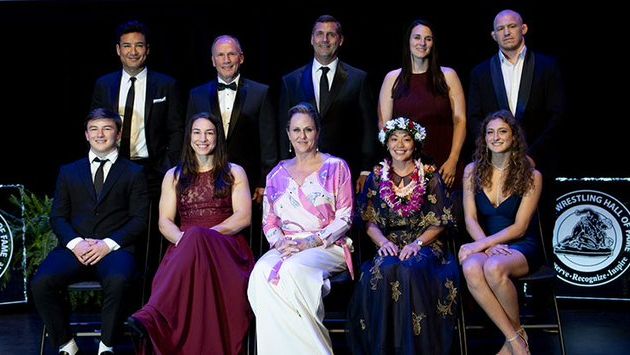 By Adam Engel and Gary Abbott
USA Wrestling
The National Wrestling Hall of Fame Class of 2022 was officially inducted Saturday night at the McKnight Center for Performing Arts in Stillwater, Oklahoma. It was both a historic class and an impressive group of the best that the wrestling community has produced.

Chun, recently hired by Iowa as the first NCAA Div. I Power Five women’s wrestling coach, won the World Championship in 2008 and earned a bronze medal at the 2012 London Olympics. She is a four-time U.S. Open champion and became the first Hawaiian wrestler to qualify for the Olympics. She represented her Hawaiian heritage with pride and sported a traditional lei during Friday night’s plaque unveiling ceremony.

Chun competed at Missouri Valley College and made the Senior Women’s National Team as a student. After her wrestling career, she spent five years as the Assistant National Women’s Coach for USA Wrestling. During her tenure, she guided athletes to 19 combined World and Olympic medals.

“This is truly something special, and I feel truly humbled and honored to be part of this Class of 2022. There are people in life who have made a lasting impact. Wrestling has truly made an impact on my career and my life. I am grateful for the many people who have shaped me into the person I have become through the sport of wrestling,” said Chun. “To my teammates and competitors who pushed me. We have become sisters in this wrestling fraternity. We bled, we sweated, we cried together. We traveled the country and the world together. To the women of wrestling who came before me, thank you for being courageous to fight for all the girls and women across the country to have their place on the wrestling mat.”

McMann became the first American woman to earn an Olympic silver medal in wrestling. She is also a three-time World medalist. In an illustrious career with global greatness, McMann was one of the only wrestlers to defeat legendary Japanese competitor, Kaori Icho, who later won four Olympic gold medals.

In college, she competed at the University of Minnesota Morris, the first varsity college women’s wrestling program, then later on the men’s team at Lock Haven. In 2010, she traded the mat for the octagon and collected 12 UFC wins, including reaching a title fight.

“I want to thank the Board for voting me into the Wrestling Hall of Fame. I think deep in my heart, I will always be the 14-year-old girl wrestler who was just scrapping to make my spot on the team. I was really surprised and really overwhelmed to receive this. There are so many people in 15 years of wrestling to thank, I couldn’t name them all. You know who you are. For those of you who know a little bit about my background, I have had a lot of obstacles to overcome on and off the mat. I want to thank you for helping me become a success story, not a statistic,” said McMann.

Distinguished Member Andy Rein’s resume includes extensive accolades as a coach and competitor. He collected a silver medal at the 1984 Los Angeles Olympics. At Wisconsin, he won the 150-pound NCAA title in 1980 for the Badgers and earned three All-American honors. After his wrestling career, he led Wisconsin for seven seasons. During that span, he coached three national champions and 14 All-Americans.

“I am grateful for the sport of wrestling. It is a sport filled with many lessons which have served me well over the years, a sport that will quickly expose you if you are not prepared,” said Rein, who also said he was grateful his family, coaches, teammates, the athletes he coached, his opponents and others. “I will finish with a challenge for all of us. Look for opportunities to inspire and lift up young people on your path. Take the time to encourage them and say the right things for kids who are working hard to achieve something and to get better.”

Distinguished Member Jake Varner capped an impressive international career with a 2012 Olympic gold medal in freestyle. He was also a 2011 Pan-American Games gold medalist. He made three World teams and secured a World bronze medal in 2011. While at Iowa State, Varner won two national championships and appeared in four NCAA finals bouts. In his last three years of college, he lost only three matches. He began his coaching career as an assistant with Penn State in 2016 but recently earned a promotion to the Head Coach of Nittany Lion Wrestling Club.

“I am very grateful to be a part of all of this, and a part of this class. There are some very great wrestlers who are up there,” said Varner, who thanked a number of family members, coaches and mentors who helped him along the way, including his college coach at Iowa State and the current head coach at Penn State, Cael Sanderson. “Somebody I want to really thank is coach Cael. I really wouldn’t be here without him and where I am at with my career without him. He really got me to the next level in college. It is pretty neat I got to get him as a coach after he won his gold medal. On my recruiting trip there, he did ask me my goals, and I told him. He said he could show me how to do that. Just watching him as a person, how he treats people, as a coach, as a husband, as a father, has really helped me.”

Melissa Simmons embodies resilience and wrestling excellence, as this year’s Medal of Courage recipient. Simmons suffered a fractured eye socket and retina damage in a car accident when she was 18. But that was just the peak of her adversity. In 2005, she completed her GED and enrolled at Northern Michigan University to jumpstart her wrestling career at the U.S. Olympic Education Center. Two weeks into the season, she tore her ACL. Two months later, her best friend Toni Copeland, drowned in Lake Superior. Later that year, she returned to the mat at Oklahoma City University with a self-made protective face mask. Currently, she works as director of operations for the University of Oklahoma women’s gymnastics team.

Mike Moyer is this year’s recipient of the Order of Merit, awarded for service to the sport, and voted on by the Distinguished Members. Moyer has been the executive director of the National Wrestling Coaches Association since 1999. Throughout his leadership, the organization has established 260 new collegiate wrestling programs, including more than 90 women’s teams, in the past decade. In 2021, Moyer led the impromptu planning of the NWCA Division III Championship after the NCAA canceled its national tournament because of low participation numbers from COVID-19.

The late Tom Clark is this year’s Meritorious Official. Clark, who died in 2017 at 58, officiated for 35 years. He worked several Olympics and dozens of World Championships. He was awarded USA Wrestling’s Official of the Year in 1998 and retired after the Olympics to create more opportunities for talented up and coming officials. Clark was referred to as a great mentor to young officials. He served as a U.S. Wrestling Officials Association board member and vice president until his death.

The Outstanding American, Mario Lopez, is perhaps best known for his role in “Saved by the Bell” and other acting accomplishments. A former wrestler at Chula Vista High School in California, Lopez is also a New York Times Best-Selling author and two-time Emmy Award winner. He finished seventh in the 1991 California Interscholastic Federation one-class high school state tournament. He hosts NBC’s “Access Hollywood” and “Access Daily” in addition to “On with Mario”, a nationally syndicated radio show. Inspired by childhood idols John Smith and Dan Gable, Lopez said wrestling taught him discipline and consistency while working to achieve goals. Those values guided him through and life in television. In his free time, Lopez likes to train jiu-jitsu and coach his son, Nico, in wrestling.

This year’s Tricia Saunders High School Excellence Award winner is Sofia Macaluso. She recently qualified for the 2022 U20 Championships in Sofia, Bulgaria. A native of Otisville, New York, Macaluso wrestled on the Minisink Valley High School boys’ team in 2019 and 2022. She did not compete in 2020 and 2021 because of COVID-19.

But wrestling is only half of her accomplishments. Her love for the environment led to an internship with New York State Senator Jen Metzger researching municipal recycling programs across the 42nd District with goals of creating a model program for communities to adopt. She is also a black belt instructor at Budo Jiu-Jitsu MMA and volunteers at Venom Girls Wrestling Club and local youth tournaments. She will wrestle at East Stroudsburg University in Pennsylvania.

Dave Schultz High School Excellence Award winner Cory Land of Moody, Alabama, won five state championships at Moody High School and recorded a 203-0 record. Land, a strong upper body wrestler, is the first from Alabama to compete in the Cadet Greco-Roman World Championships. He finished fifth in 2019 and claimed a silver medal in 2021. Off the mat, Land volunteered with the local elementary school’s Read Across America Day and holiday festivals. In addition to other student organizations, Land was co-editor of the Moody High School Yearbook. He will wrestle at Northern Iowa.