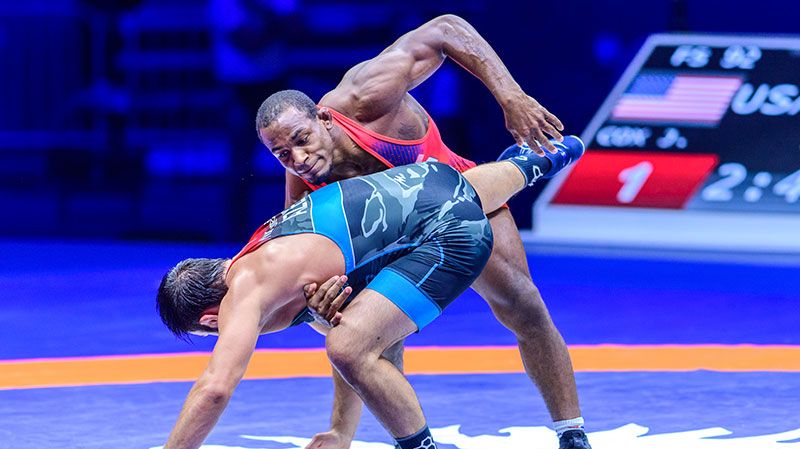 By Gary Abbott
USA Wrestling
BELGRADE, Serbia – Past World champions Thomas Gilman, Kyle Dake and J’den Cox of the United States all won semifinal matches on Friday night and have advanced to the finals on Saturday at the World Wrestling Championships in Stark Arena.

2021 World champion Gilman was in command in his 8-2 semifinal victory over 2018 U23 World bronze medalists Wanghao Zou of China at 57 kg. Gilman led 4-1 at the break, with a takedown, a point on the shot clock and a step out. In the second period, Gilman scored two more takedowns to lead 8-2. Zou could only add a step out in the closing seconds.

In addition to his World title, Gilman won a 2017 World silver medal and a 2020 Olympic bronze medal. Orignally from Omaha, Neb., Gilman was an All-American for the University of Iowa.

Three-time World champion Dake edged 2019 World bronze medalist Yones Emamichoghaei of Iran in a 2-2 criteria decision in the semifinals. Emamichoghaei led 2-0 at the break, after getting a point when Dake was put on the shot clock, then forcing a stepout. In the second period, Dake got behind Emamichoghaei and took him down out of bounds, getting four points from officials. Iran challenged, and the jury changed the score, giving Dake a point on a step out and another point on a fleeing call. Although the bout was tied 2-2, Dake had criteria, and when no other points were scored, he advanced.

Two-time World champion Cox was too much for 2021 U23 World champion and 2021 Senior World bronze medalist Osman Nurmagomedov of Azerbaijan in the semifinals, winning 7-0. Cox led 1-0 at the break after Nurmagomedov was put on the shot clock and did not score. In the second period, Cox was in command, getting two takedowns and an exposure for the final margin of victory.

Cox will battle 2021 World champion Kamran Ghasempour of Iran in the gold-medal match on Saturday.

Cox won his World titles in 2018 and 2019, and was an Olympic bronze medalist in 2016. He also won World bronze medals in 2017 and 2021. Originally from Columbia, Mo., he was a three-time NCAA champion for the University of Missouri.

The United States has now placed six wrestlers in the gold-medal finals, as Zain Retherford (70 kg), Jordan Burroughs (79 kg) and David Taylor (86 kg) compete for World titles later this evening. All of the action is live on FloWrestling.