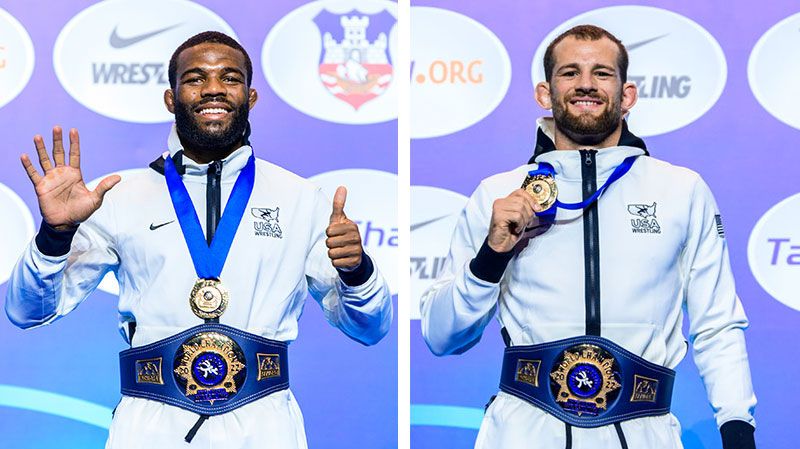 Add in three World bronze medals, and Burroughs has now claimed 10 World and Olympic medals during his amazing career. He is now tied with Gray for the most World titles with six.

In a rematch of the 2021 World Championship finals, Burroughs defeated Mohammad Nokhodilarimi of Iran, 4-2. Nokhodilarimi led 1-0 at the break, after Burroughs was put on the shot clock and did not score. Burroughs tied it up with a deep shot that forced a step out, making it 1-1. The key move was a takedown by Burroughs for a 3-1 lead. Nokhodilarimi managed to get a step out with about one second left for the final score of 4-2.

After hugging his coaches, Burroughs ran around the arena with the American flag, and raised six fingers to the cheers of the crowd.

2020 Olympic champion David Taylor won his rivalry match in the 86 kg finals over 2016 Olympic champion Hassan Yazdani Charati of Iran by a convincing 7-1 margin, claiming his second World title. In their fifth meeting at the international level, Taylor now has a 4-1 record against Yazdani, losing only in the 2021 World Championship finals.

Yazdani led 1-0 after Taylor was placed on the shot clock and did not score in the required 30 seconds. Taylor scored a low single leg takedown to lead 2-1 at the break. The second period belonged to Taylor, who scored two more takedowns and forced a step out, and kept Yazdani from completing any of his offensive attacks.

Zain Retherford claimed the silver medal at 70 kg, after losing to 2022 Asian champion Taishi Narikuni of Japan. 10-0 in the finals. Narikuni scored the first takedown to lead 2-0, then secured an ankle lace, with which he was able to turn Retherford four times to secure a first-period technical fall.

Retherford was dominant on the way to the finals with two technical falls and two shutout wins. He outscored his first four opponents, 32-0.

Hayden Zillmer, who had a 2-1 record at 125 kg on Thursday but was not eligible for repechage, placed seventh and scored eight team points for the USA.

After the four weight classes in Group 1 were completed, the United States is in first in the team race with 78 points, ahead of second place Iran with 55 points. Georgia is in third place with 38 points.

The USA has clinched at least 60 more points from Group 2, in which all three U.S. wrestlers punched their ticket into the Saturday finals: Thomas Gilman (57 kg), Kyle Dake (74 kg) and J’den Cox (92 kg). Iran only advanced one wrestler from Group 2 into the gold-medal finals on Saturday.

The final three U.S. wrestlers begin their competition on Saturday, Seth Gross at 61 kg, Yianni Diakomihalis at 65 kg and 2016 Olympic champion and two-time World champion Kyle Snyder at 97 kg, with preliminaries at 10:30 a.m. and semifinals at 5:00 p.m. local time Group 2 finals will begin at 6:00 p.m. Belgrade is six hours ahead of U.S. Eastern time. All of the action is live on FloWrestling.