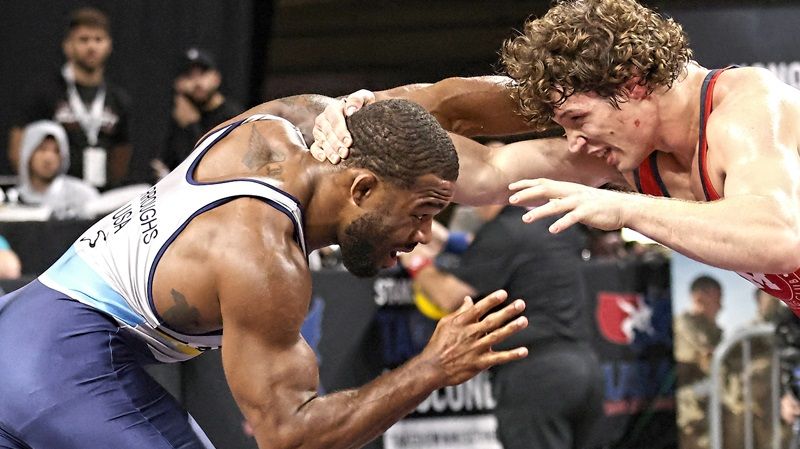 By Gary Abbott
USA Wrestling
Jordan Burroughs of the Sunkist Kids won a new weight class to qualify for his 10th career U.S. World or Olympic Team, with an impressive victory at the World Team Trials in his college hometown of Lincoln, Neb. on Sunday.

Burroughs has made his eighth Senior World teams, along with two U.S. Olympic Team berths. In his previous nine World or Olympic appearances, he has won eight medals, five gold and three bronze.

He defeated talented Alex Dieringer of the Titan Mercury WC/CKWC in the finals series to the delight of his local fans. He secured a 10-5 victory in the first match, winning the key positions, then got an early lead and scored a 4-3 win over Dieringer in match two. Burroughs was a Hodge Trophy winner for Nebraska, then trained there during his international career until recently moving back to his Jersey roots with the Pennsylvania RTC.

Two-time World champion J’den Cox of the Titan Mercury WC/NJRTC, who was the Missouri and Central Region winner of the National Wrestling Hall of Fame's Dave Schultz High School Excellence Award in 2013, secured a spot on his fourth Senior World team with two-match sweep over Kollin Moore of the Titan Mercury WC/Ohio RTC at 97 kg. Cox shut out Moore in both matches, winning 5-0 in the first match and 4-0 in the second bout. Cox boasts two World titles, an Olympic bronze and a World bronze in his four World-level appearances, winning a medal every time.

James Green of the Titan Mercury WC/SERTC is making his sixth trip to the Senior World Championships, after claiming the 70 kg weight class with a two-match sweep over Ryan Deakin of the Titan Mercury WC/Wildcat WC, who was the Colorado winner of the DSHSEA in 2016. Green scored late in the first match to secure a 6-6 criteria decision over Deakin in bout one. He took the lead and kept the edge for a 4-2 win in bout two. Like Burroughs, he was a star for Nebraska and trained here for years, before moving to his new location at Virginia Tech.Green has won a World silver medal in 2017 and a World bronze medal in 2015.

Two-time World bronze medalist Nick Gwiazdowski of the Titan Mercury WC/Spartan Combat RTC, who was the New York winner of the DSHSEA in 2011, qualified for his fourth Senior World Championships, with a two-match sweep over 2019 Junior World champion Mason Parris of the Cliff Keen WC at 125 kg. Gwiazdowski had an edge on power and technique, winning the first match 6-0, then adding more offense in a 10-3 win in bout two.

Making a second career Senior World Team was Daton Fix of the Titan Mercury WC/CWC, who was the Oklahoma, Central Region and national winner of the DSHSEA in 2017. Fix secured a two-match sweep over Nathan Tomasello of the Titan Mercury WC/OKRTC at 61 kg. Fix was aggressive in both of his wins, taking bout one by an 8-3 margin and bout two with a 7-0 shutout.