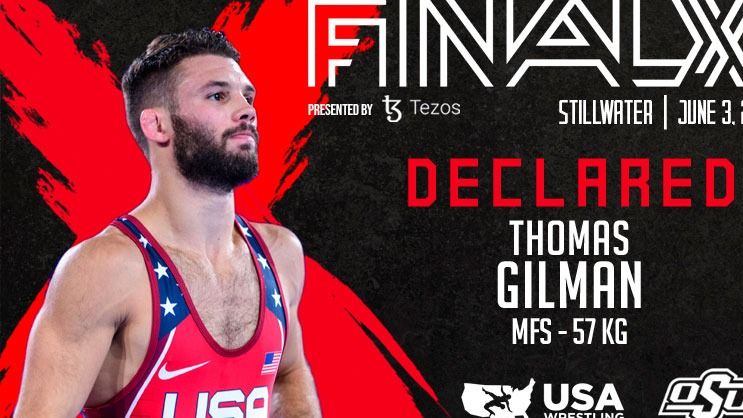 He will battle for a spot on the 2022 U.S. World Team in Final X Stillwater, presented by Tezos, on Friday, June 3 at Gallagher-Iba Arena on the campus of Oklahoma State University.

The Nebraska winner of the National Wrestling Hall of Fame's Dave Schultz High School Excellence Award in 2012, Gilman was a 2021 World champion at 57 kg in Oslo, Norway. He won a bronze medal at the 2020 Olympic Games in Tokyo, Japan. He claimed a World silver medal in 2017 and was a member of the 2017 U.S. team which won the team title at the Senior World Championships. He was also fifth at the 2018 Worlds. Gilman claimed a 2014 Junior World bronze medal and competed on two Junior World teams and a Cadet World Team. He was a three-time NCAA All-American and 2017 Big Ten champion for the University of Iowa. A native of Omaha, Neb., Gilman won four Nebraska state titles for Skutt Catholic High School.

The Final X series will determine the 2022 U.S. Senior World Teams in men’s freestyle, women’s freestyle and Greco-Roman wrestling which will compete in Belgrade, Serbia, Sept. 10-18.

The Team Selection procedures for the U.S. World Teams in each style allows for 2021 Senior World medalists and 2020 Olympic medalists to advance directly to Final X at a specified weight class. Gilman has met this requirement and accepted his qualification.

The Final X opponent for Gilman will be determined at the World Team Trials Challenge Tournament, set for Coralville, Iowa, May 20-22.

Final X Stillwater will be held alongside the National Wrestling Hall of Fame Honors Weekend, which is happening at the Hall of Fame facility next door, June 3-4.

In addition to Final X Stillwater, Final X New York (which serves as the Beat the Streets Annual Benefit this year), will be held at Hulu Theater at Madison Square Garden in New York City, Wednesday, June 8. There will be 15 other weight classes contested in New York.